Second time I’ve read this. Probably won’t be the last. So much earth info tucked into the story of how a Canadian orphan became an internationally reknown conservationist. And a few other ‘ists’.

Sent to live with family in Lisheens, Ireland, (Lisheens is the anglicized version of an Irish word for ‘stone circle’), Beresford-Kroeger had the luck of growing up in a world of ancient Celtic knowledge and Brehon Laws (which were ahead of their time insofar as considering equality of people and respect for nature). Living through the depression and the years of WWII in relative poverty, she remembers her childhood as a world rich with appreciation, wisdom, and lessons in how to quietly contribute in ways that were/are of benefit to all life forms. That was the Brehon way.

“From my childhood… I’d been taught to… always look for ways to improve the world around me. I’d never had any money… instead I gave back via other means.”

It was also the beginning of her lifelong interest in healing the earth, understanding at an early age that trees are more than places to picnic under but function as the lungs of the planet. Eventually it began to occur to her that people didn’t need to travel so much, shop so much, drive so much, have so much, and destroy so much.. She became an advocate of simple living, but it was trees, especially, that remained her passion and to speak for them in a variety of quietly powerful ways has been her mission ever since. 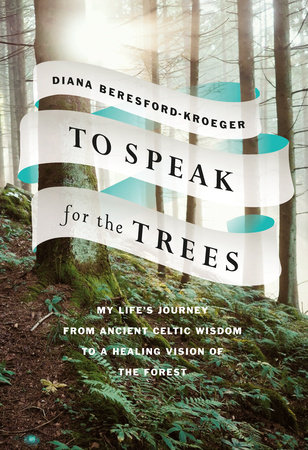 Divided into two sections, the book initially follows the author’s life from that childhood deep in Druid lore to her eventual contributions as not only a conservationist, but a biologist, botanist, research scientist (during which time she discovered cathodoluminescence), scientific advisor on genetic modification, writer of bioplans, international speaker, environmental activist (saving, among other slices of the planet, a section of boreal forest the size of Denmark, now a UNESCO site).

In the early ‘90’s she propagated hellebores from Bosnia to raise money for women affected by the war in the former Yugoslavia, which paid for 15,000 surgeries and electrocardiogram machines for Doctors Without Borders and a safe house in the city of Tuzla. Later, she launched The Millenium Project, sending out 750,000 seeds and saplings to 4,500 recipients over a period of years, all native species, all propagated on her farm. She is also a fierce advocate for pollinators, sitting on boards and fighting to legislate chemical-free areas around farmers’ fields.

But the book isn’t actually ABOUT any of this.

It’s about her life as it relates to the natural world, her path to knowledge and discovery… with chapters such as ‘Comfort in a Stone’, ‘The Yellow Box of Paints’, ‘No Burden for a Woman to be Educated’, ‘The Science of Ancient Knowledge’, ‘The Sumac Flower’, etc. It’s mostly about paying attention.

The second half contains ‘The Celtic Alphabet of Trees’ in which are listed 26 trees and shrubs, each with their own short chapter of fascinating tidbits such as medicinal properties and information on weather watching… (a halo around the moon means a change in weather and if there are one to three stars within the halo, they represent the number of days until that change).

Aspens, for instance, are harbingers of weather patterns if you know how to read them. And who knew there are 25 species of wild apple trees, all of which now rare or endangered and that it’s these wild trees not the cultivars that are most important to pollinators and that bees were once revered, and protected by Brehon Laws.

“[The Druids]… honoured the tapestry of life around the honeybee. These workers were considered to be an extended part of the family. Births, marriages, deaths and anniversaries were announced to the bees. Grief was always shared with the bees in a form of non-verbal communication.”

“We are all woodland people. Like trees, we hold a genetic memory of the past because trees are parents to the child deep within us. We feel that shared history come alive every time we step into the forest, where the majesty of nature calls to us in a voice beyond our imaginations. But even in those of us who haven’t encountered trees in months or even years, the connection to the natural world is there, waiting to be remembered.”

And reminds us that the fight for climate change is a long game and that it CAN be fixed with faith, determination and buy in. The DOING of something positvie, even something small, by millions of people would have an effect. Which is different than shouting the odds and blaming The Other and grandstanding. She’s talking about quietly doing something together.

She has an idea: that if every person on the planet planted just one tree per year for the next six years, we’d stop climate change in its tracks. “

“Three hundred million years ago, trees took an environment with a toxic load of carbon and turned it into something that could sustain human life. They can do it again.”

Of course she recognizes that not every person is able to plant even one tree but says even a simple pot on a balcony is helpful… keeping in mind there are those who can plant more than one tree per year. Her point is that however small we feel, we have the power to be part of a huge collective if only we stop waiting for a BIG CHANGE,  or a big opportunity or a BIG player to make the first move… all of which would be splendid, but while rattling cages might vent some frustration, it’s the power of ONE small action,  times millions of people, that could actually effect real change.

An example of this is evidenced by what’s happening as a result of the current shutting down of so many polluters. Smog has lifted, water is cleaner. That’s how quickly it happens. So she’s right, it CAN be done by many people doing small things. The key is to understand there will be no social media ‘likes’,  no recognition, no applause, awards, or even signs of change for a very long time… The key is to do the right thing anyway. With conviction.

“… we can fight climate change… we can band together to take on government and industry; we can keep informed of plans to destroy forests and fight them at every turn”

And to keep on doing it long after the media no longer pays attention to you.

On a smaller scale, she says, “we can take on the role of guardian and steward within our own neighbourhoods and towns, as has been done to great effect in Winnipeg… The people of that city have come together to protect their elm tree… These efforts have inspired others to do even more… If you have a large tree on your street, make sure your local council knows that you value it. Every opportunity to vote is an opportunity to put someone who cares about forests in a position of greater power and authority.”

“There is a deity in nature that we all understand. When you walk into a forest—great or small—you enter it in one state and emerge from it calmer. You have that cathedral feeling and you’re never the same again. You come out of there and you know something big has happened to you… We now know that the alpha- and beta-pinenes produced by the forest actually do uplift your mood and affect your brain through your immune system…. The beneficial effects of a twenty minute pine forest walk will remain in the immune system’s memory for about thirty days.”

And admits how much we don’t know.

“We still can’t explain how water gets to the top of a tree—how the plant defies physics and causes water to run uphill. With such fundamentals still eluding our understanding, how can we cut down a forest? Just imagine the arrogance and greed of that—and the short-sightedness.”

Because, yes, we have SO MUCH TO LEARN from nature. Cutting down trees without considering the effects is madness. Polluting for the sake of making and buying things we don’t need and getting to places we don’t need to get to is a habit not a necessity.

“…palms up, arms outstretched… tilt your head up, too, and let the sunshine land on your face, your hands, the rest of you. Feel the sun on the surface of your skin. With this act, you are becoming like a tree… The feeling you have on your skin is a dance with the short-wavelength energy of the sun. This dance has a name in the ancient world of the Celts…. song of the universe.”

The purpose of which is connection… which applies to everything. To us and trees, us and each other, everything and everything. Because the more we understand The Other, whatever and whoever that is, the better off we all become as a result.

So go on, don’t be shy… palms up, arms outstretched…

We have so much to learn.

Prevent the next pandemic; protect nature.

2 thoughts on “this is not a review: ‘to speak for the trees’, by diana beresford-kroeger”