In her thirties, Elisabeth Tova Bailey suddenly finds herself bedridden for a year as she recovers from a neurological disorder. Early in her convalescence, a friend brings her a potted violet dug up from a nearby forest. Under one of the leaves the author notices a snail. She watches it, expecting not much. What she discovers becomes not only an appreciation of this tiny creature but a kind of epiphany about her own slow process toward healing. All of which becomes the delightful memoir: The Sound of A Wild Snail Eating.

(spoiler alert: you can actually HEAR a snail eating)

Easy as it would have been, Bailey does not clutter the book with slow healing/snail metaphors, doesn’t even really mention her condition except to 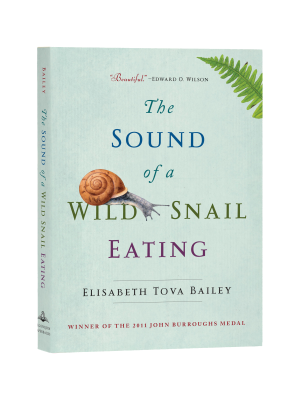 set it up at the beginning and how she notices the discomfort of those who visit, how her stillness makes them uncomfortable, how their own natural state is one of constant movement, agitation almost. At the end of the book she revisits her condition and takes what feels like a deep breath as she realizes what she’s been through and how impossible the year would have been without the snail.

Because the book is mostly about the snail…. as seen through the lens of someone who has few choices of focus and has chosen… the snail.

And so with her we learn with her, that snails do not, for instance, sit in their shells attached to leaves all day. They wander. They find places to drink (Bailey’s snail made its way regularly to the little tray under the pot where it searched out tiny drops of water) and they have preferences in food. Initially taking what it could find (bits of paper on the bedside table where the pot stood) Bailey’s snail (she never named it) much preferred the wilted blooms the author set down for it once she realized that fresh blooms were not its cup of tea. And remember, she’s bedridden. So she has nothing but time to study this tiny creature, the way it waves its antennae, and under what conditions. The snail becomes almost her entire focus and she searches out info online as well as through reading material she has brought in to her (a long list of ‘Selected Sources’ is included at the back of the book).

Each chapter opens with a short excerpt or quote from a piece of text or a poem and it’s a little mind-blowing as you realize how MUCH has been written about snails, how they’ve influenced art and literature, even architecture (at one point Bailey considers the design of spiral staircases and how it would feel to have one’s head at the top while our feet were at the bottom, our bodies twisted in the middle).

She learns about the gastropod’s history on earth, having existed for a half billion years and appearing on almost every part of the planet and how they move from one geographic area to another. The book weirdly charming in the best way, compelling with so much of interest in the way of snail trivia that it’s nearly impossible to imagine seeing them in the same way again, or ever taking them for granted.

Because (we discover) snails, like anything you focus on, are interesting.

It should be noted that none of this gastropod info is heavy going and all of it, fascinating. At only 175 or so pages, the book reads like a journal of notes and details the author found personally interesting, added her own moments of mulling and wonder, then arranged it into text.

“The mountain of things I felt I needed to do reached the moon, yet there was little I could do about anything, and time continued to drag me along its path. We are all hostages of time. We each have the same number of minutes and hours to live within a day, yet to me it didn’t feel equally doled out. My illness brought me such an abundance of time that time was nearly all I had. My friends had so little time that I often wished I could give them what time I could not use. It was perplexing how in losing health I had gained something so coveted but to so little purpose.”

This appears early in the book. By the end she has come to realize that the very act of being forced to slow down, of living with an abundance of time, and a snail, has allowed for much and continual forward movement.

Many thanks to Theresa Kishkan, who suspected I’d like this

given how much I enjoyed ‘the mole book’.