Rhonda has been angry and unhappy for a long time. It doesn’t help that she lives on the outskirts of a town whose claim to fame is being the nation’s teenage suicide capital “…just past the point where the Pinegate Pizza won’t deliver”. Nor does it help being married to Dan, a farmer with a soul as 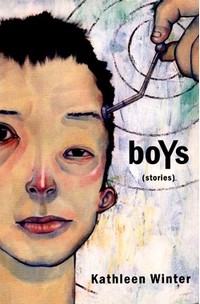 romantic as a milking machine. God bless him though, he’s one of those guys who thinks that duty and maintaining a roof over one’s head is enough. In his own out-to-lunch way, he tries. He’s probably in as much pain as his wife but it matters to him less or it matters in a different way. He takes solace, not in conversation, not in reaching out to her, but in immersing himself ever deeper in the work of livestock, insulation, leaks in the barn. Nothing personal… these are merely the things that matter.

Part of her knows he won’t change yet another part continues to believe he’s capable—if he tried—of finding a way in. She’s waiting for the moment where he’ll sit down next to her in his cowshit covered clothes and say to her:

“…Why don’t I get a shower and make you a cup of tea? Hoffman’s elm is like us, isn’t it? I’m sorry you’ve been lonely inside. Let me touch you? Not with my paws—with the word rain, the colour green, with eating bread and sitting here till a yellow bird comes and eats the crumbs.”

She’s starved for him to merely try.

When Dan suspects (correctly) that Rhonda is having it off with Burt, the local ‘exotic’ who runs a Lebanese cafe, and who thinks Rhonda is perfect, he buys her tulips for Valentine’s Day. This is huge in their dry and loveless union and enough to keep it going for another painful stretch, despite her apathy.

“…she no longer cares that her vinyl toilet seat has torn pieces that stick up and prickle her butt.”

While she realizes the thing with Burt can’t last, she takes some comfort in the knowledge he can be replaced. By which logic, so can Dan, albeit with a bit more difficulty and anyway, what would be the point?

“You can tell about the state of anyone’s marriage from their medicine cabinet,” she tells her sister Bett. Her own has empty calamine lotion bottles piled in with rubbing alcohol for ears pierced fifteen years ago, ancient antibiotics, blunt useless tweezers and a stack of wrapped soaps with cobwebs on them from the Holiday Inn in 1989, which was the last time she and Dan took a trip together, and that was to bring home a trailer for getting show cattle to the fall fair. She doesn’t care about the fence Dan promised to make for her garden twenty years ago. She doesn’t care that Dan had an affair when the kids were little, or that there has never been chemistry between Dan and herself. She doesn’t even care that the magic with Burt is dying out. Bett calls him an interim phase and that’s fine by Rhonda. What matters is that her anger, her poisonous anger, has drained away, thanks to Burt. She watched her mother carry the same anger, panicked when she realized she had it too, knew one day she was mad as hell at her whole life and it looked like there was nothing she could do about it. Burt stopped the time bomb with his hideout, with its cool walls and blue shadows where she didn’t have to do things from morning till night in which she had no interest. She will feel relief deep down, be able to breathe deep down, whenever she thinks of Burt even after this is over, which it almost certainly is already, with no illusion of anything permanent. No one has mentioned Rhonda helping Burt run his cafe, but not in the same way that no has ever mentioned her helping Dan run his farm.”

— excerpts from ‘Burt’s Shawarma’, from the collection BoYs, by Kathleen Winter

Three Impressions Overall: delicious ironies, entire worlds sympathetically drawn in mere pages, and the kind of truth that makes you squirm as it pulls you forward, then leaves you pretty much where you thought you’d be left for pretty much the reasons you thought you’d be left there. Only thing that’s changed is that now you’re aware of the ‘why’. It may not feel like enough but of course, truth is always more than enough. (And may I say I love the cover of this gorgeous collection.)

Note: this post first appeared in May/2011 as part of Year of the Short Story (YOSS) celebrations.

Now part of the Re-Run Series.

In the context of Robin Black’s story ‘Gaining Ground’—in the context of serendipity or cooincidence, of insight and knowing yet not understanding, of not wanting yet being obsessed, of the death of a woman’s father on the night electricity runs in her child’s bathwater—in that context, or on its own—this is beautiful:

“Because I see my father. I do see him there. I see him standing outside of that tunnel, in the dark. And I see myself at that moment dipping my beautiful naked child into her bath. I know exactly where they found him. I know the path he walked from the Place. And I know the ripples of water around her small body as she plays. I know the slight gray tinge of daily dirt that falls around her, and rings that bathtub. And I know how he got out. Which nurse had her back turned. Which orderly thought he knew that my father was tucked into bed. And I know the smell of my daughter’s shampoo. The way her ears emerge as her hair rises into lather. I know what my father was wearing, his gray wool pants I mail-ordered him last month, a white T-shirt bought by my mother God knows when, no shoes. The last time I saw him, he’d lost so much weight. His food was all poisoned, he believed. I know that. The air was growing harder for him to breathe. The air that Allison breathes. I know that he couldn’t breathe her air anymore. I know he was diminishing. I know that she is growing. The nurses were pouring toxins into his room with their words. I know the songs I sing to her as she bathes. The songs she begs me for. He wouldn’t let anyone speak around him. He had forbidden even me to speak. Every word was deadly. Every breath was painful for him.” ~ from the collection If I Loved You, I Would Tell You This, by Robin Black [Random House]

In celebration, I’ve created a new category—yoss please!—where I’ll post occasional ramblings on stories that have taken my fancy for whatever reason. It should be noted the category will be sub-titled: this is not a review. (I have too much respect for the formal review, done well, to even pretend to walk on that turf, but I absolutely agree that we could do with inviting more and larger discussions about individual stories, rather than limiting chat to the collection as a whole.)

So, in honour of bite-sized lit, and to kick things off, a tiny pleasant morsel of a site .