In a nutshell: personal essays, each focusing on one bird or aspect of birding, as well as a gentle inter-weaving of childhood memories that embrace the disciplines of piano, Russian literature, ballet, which in alternating ways both parallel and contradict the author’s approach to a growing fascination/obsession with birds.

Also in a nutshell: an entirely lovely read.

So lovely in fact that I found myself looking forward to settling down with a chapter or two in the way you might call a friend and say, so what have you learned today about your beloved birds and KNOW you will be getting a fabulous story if only, and maybe especially, about the most ordinary of moments, about how these moments reflect so much more than the moment and how there is always some very great thing learned, about birds, yes, but about self at the same time, in a completely NOT self-focused way.

There is no navel gazing here. Observations, both avian, and self-reflection, come as happy surprises.

Zarankin writes (along with so much else) about getting up in the wee hours, in all weather, driving to meet birding groups in parking lots and from there heading to wherever sightings of note have occurred. She writes about how she can hardly believe she’s doing this, how she notices her house filling up with birding books and décor, her conversation laced with avian facts; she is considering the purchase of a multi-pocketed vest, the likes of which once made her cringe. Having reached her thirties without noticing much more than a robin she is stunned to realize the variety of birds that exist in the city of Toronto and, to be honest, I’m stunned right along with her. How is it I don’t know a nuthatch… have I ever even seen one? Apparently they identify themselves by walking headfirst down tree trunks. And warblers, well, they’re everywhere it turns out, and, get this: there is something called a veery. Also a phalarope, a towhee. These are birds that live… right here.

My mind is blown by how much we don’t know.

This is a book about discovery. Birds, yes. But passion mostly. It’s uplifting in a down to earth way; there are no promises that following your passion will lead you to what you expect, in yourself or otherwise, but, as Zarankin shows by her own example, there’s a very good chance it will lead you to the surprise of your own heart.

“It’s hard to measure my birding progress. Ten years later, I am no longer a neophyte… But I know I’m still far from being a skilled birder.

“…. Maybe the point isn’t about measuring at all; it’s about seeing.”

“The life of a bee is like a magic well. The more you draw from it, the more there is to draw.” ~ Karl von Frisch

—A beautifully made book of satiny semi-gloss pages, colour photos, drawings, side-bars rife with fascinating facts, bee lore and poetry. Co-published (2008) by D&M Publishers (Greystone Books) and David Suzuki Foundation.  A joy to read. And important too. [Excellent gift idea. The bees will thank you. Which, in turn, is good for us human bee’ns.]

They are herbivores, sting only in defence; raise young on protein rich pollen while wasps are carnivores, sting for food; eat other insects; also like people food [especially mine].

A colony is about 300-400 bees of which most of those are worker bees. 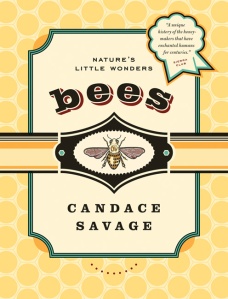 All worker bees are female; they live 60 days or so, except for those born late in season, which will spend a winter in the hive.

Only a few males are produced in late summer for one purpose: to mate and thereby produce fresh queens for the following year.

After the once-in-a-lifetime mating spree, the queen has enough sperm stored in her body to fertilize each egg she lays. Fertilized eggs become female (worker bees). Unfertilized become male (drones).

A Queen bee lays eggs (1,500 each summer day/ half a million in a lifespan of two years) while worker bees help raise successive broods of females.

The eggs are fed and raised by the female worker bees. Only a very few are reared in special areas of colony and fed the ultra-nutritious royal jelly, which allows them to grow into queens, i.e. egg layers.

Worker bees know that it’s time to raise a new queen (i.e. feed the royal jelly) when the current queen’s pheromones no longer predominate in the hive.

Drones die immediately after mating, or are killed. [I’ll spare you the gruesome details.]

Bee stingers don’t get stuck in bee flesh the way they do in human flesh. So they ‘can’ sting one another to death. [see above… but this is merely one method of getting rid of unwanted drones]

Honeybees can see colour.  [The book outlines how this was first shown by placing a bowl of sugar water on a square of blue paper. The bees, of course, were attracted to the sugar. Then the bowl was removed and the blue square moved to a different position among several grey squares. Didn’t matter. The bees still went to the blue square.]

The book cites the work of Karl von Frisch, A Nobel Prize winner for his research on the honeybee, and Martin Lindauer, a student of von Frisch, and a renowned bee expert in his own right. Of Lindauer, Savage writes:

“Through the glass walls of his observation hive, Lindauer could watch the workers as they scurried around performing their household tasks. Here, bees were cleaning out vacant cells in preparation for reuse, by removing old cocoons and re-coating the walls with wax. Over there, others were poking their heads into occupied cells, the ones with grubs in them, to check on the larvae and see if they needed to be fed. (According to Lindauer’s data, nurse bees inspect each larva, on average, 1,926 times during the five or six days before it makes its cocoon but feed it on only 143 of those visits.) Elsewhere in the hive, bees were busy building comb, capping comb, packing comb with pollen. Tucked away in a quiet corner, an individual might be flicking a droplet of nectar in and out on her tongue, waiting for the honeyed glob to thicken. At the same time, others were fanning their wings near the entrance, for cooling or ventilation, or standing guard in the doorway, with their forelegs raised and their antennae up, at attention.”

Lindauer noted that bees are hyper aware of various stimuli, changes in temperature, texture, taste, and instinctively know how to respond or communicate direction to others. When he inadvertently put a heat lamp too close to the hive he noticed the bees stopped foraging for pollen and collected water droplets instead to flick into the hive for a cooling effect.

Savage addresses the issue of colony collapse and other problems we’ve contributed to, while noting that “Bees [bring] sweetness out of chaos. Humans, on the other hand, [seem] to have an instinct for devastation. Could it be that these insects have something to teach us?”

And this, perhaps my most favourite morsel of all:

“Unlike human groups, which often seem less intelligent than the individuals who make them up, a swarm of bees is always smarter than the sum of its parts.”