There is a framed series of photos on my kitchen wall. Clouds scudding across a Florida sky. Each photo shows the exact same square of sky above a couple of palm trees, as seen from a poolside chair so many years ago I was still using 35 mm film and my trusty Pentax.

There are only four shots. But they represent the whole morning and my idle joy in having nothing to do but read… no idea what I was reading, but possibly The Portable Dorothy Parker  (I remember her from around that time) or River of Grass,  by Marjory Stoneman Douglas, about the almost decimation of the Everglades. In other words not a novel. Am guessing my mood couldn’t have been focused enough for a novel if I was able to take notice of the sky changing every so often and carefully positioning the camera to take precise shots (film was expensive) between and above those precise palm fronds.

Those aren’t the actions of someone engrossed in a novel.

The first photo in the frame shows a clear sky with only a wisp of cloud. The second, a larger, but still small, cloud moves in from the left. By the third shot, the sky is mottled with cloud cover, though wispy still, and by the fourth, heavier clouds have moved in and I probably decided it was time to gather my pool toys and go have lunch.

I love these pictures, the memory of a holiday, yes, but also a reminder of how this follows that, how time is passed and passes, and continues…

Someone once told me they rarely look up. I was astonished — how can anyone take the whole sky for granted? But it occurs to me that maybe it comes from our habit of looking *for* something… something useful, or unusual, something to compare ourselves with, as in looking at people, or something beautiful, as in a sunrise or sunset or rainbow.

Each morning I stand outside in approximately the same place to greet the day and every day I look at the same slice of sky above a cedar hedge in the space between two very tall spruce. And every day the sky is never the same. Sometimes the colour of Laurentien pencil crayon Peacock Blue, sometimes another shade. Sometimes speckled or fluffed or water-colour-streaked with cloud. Now and then picture-worthy… most often not. Over the years I’ve seen flashes of lightning in that space, the occasional plane on its way to Toronto, and one year the Snowbirds performed for a local school named after a fallen comrade and I stood in my backyard and watched, in awe, as they swooped and ducked and dived in that very bit of sky.

It is also, apparently, part of the Trans Canada Flight Path for geese.

There’s nothing magical about that slice of blue, it’s just the one I happen to most often look at. Not from a lounge chair and never for an entire morning as you do on holiday, but just as habit. Sometimes I go outside and look up, without realizing it even, with maybe a question on my mind…

And a cardinal flies by in answer. 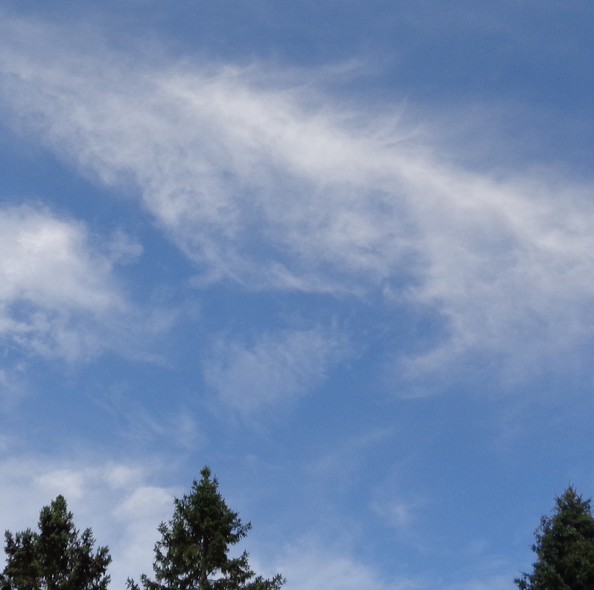 Our first night, on the patio where we go for dinner under a clear black sky and a moon positioned like a fulsome smile, a man crosses himself before digging into a burger and fries. He’s wearing a navy blazer and white shirt, open at the neck. He’s maybe 65 years old and has a full head of greying hair.

In the morning, a mallard and his mate [Ethel and Norman] stand at the edge of the pool, wary, concerned perhaps about chlorine levels or the risk of interlopers exuberant with all manner of toys and flotation devices. I share their apprehension. We become fast friends.

The view from our room: mudslide where the ground has shifted from under a gazebo and runs into a man-made stream. At first I think this is a negative, but then Ethel and Norman arrive and spend each day there quacking and paddling and dining among the shallow water of this new ‘sandbar’ and I realize the mud has created the only bit of natural landscape on the entire property.

The ducks and I couldn’t be happier. 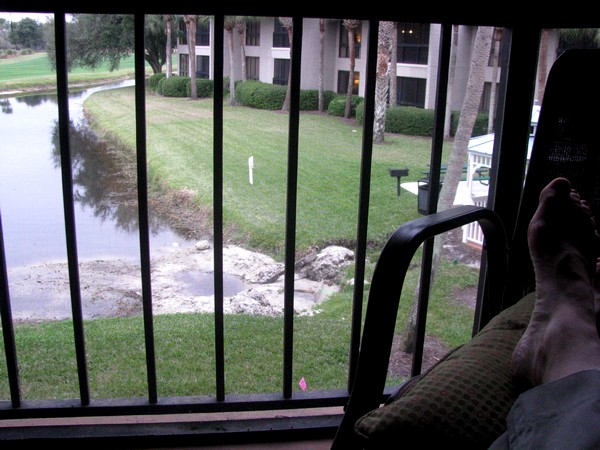 Not one but two toddlers wearing diapers in the hot tub. [Scratch hot tub from list of things to do today. Maybe also tomorrow.]

The BBQ guy who uses the communal barbecue… puts on a steak at 6 p.m. then comes back for it at 7:15. On another night he does sausages.

On a cobblestone street, a family stop to offer a homeless man a take-out bag of waffles from brunch. Wordlessly the man accepts and only when they’re out of sight does he begin eating.

The Morse Museum, which houses the world’s largest collection of Tiffany ‘art’, glass, pottery, paintings. Before this I thought Tiffany was a lamp.

Me on the balcony, reading the memoir, Voice of the River, by Marjorie Stoneman Douglas, whose River of Grass  may be the most important book ever written about Florida. A wood stork lands and then takes off again from a tall pine just the other side of the screen.

From our window at night, the fireworks from Disney World. Which makes me wonder: isn’t Pluto, et al, enough for people? They need fireworks too?? But then it occurs to me that maybe that’s just a polite way of getting rid of everyone, like flicking the lights on after the dance is over. 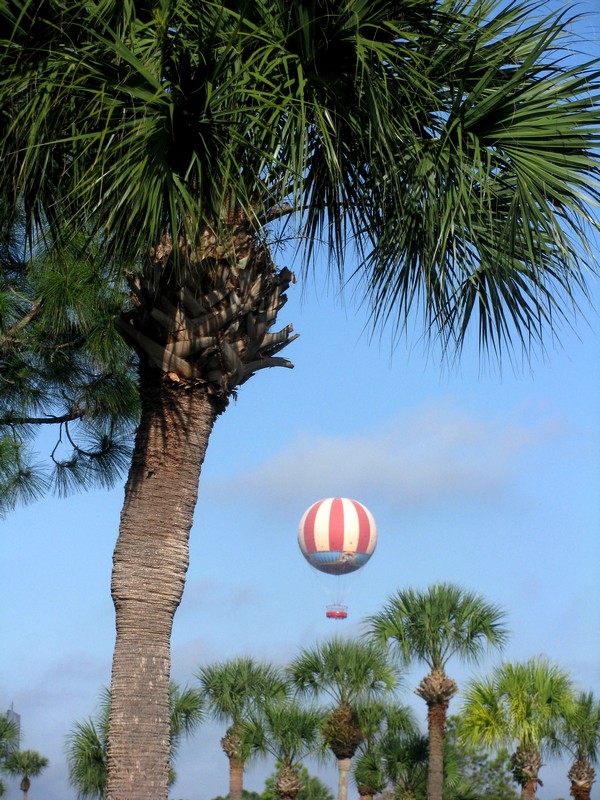 The light just before sunset. There’s nothing like Florida twilight; not ours in summer, nor anything in the Caribbean.

It’s not this light…

It’s before that, something fleeting and golden, almost sepia for a second, not transferable to film. And anyway, it’s more than light. There’s something in the air, a scent, an energy, as if for that brief moment before sunset each day, if you pay attention, you’ll glimpse something under the veneer of landscaping, something reminiscent of the land as it once was—a wild, natural beauty with mangroves at the shoreline instead of beaches, when live oaks, pine, cypress and saw grass outnumbered palms; when the birds lived in flocks of hundreds and the panthers and dolphins were real, not logos on a sports jersey. When the Everglades were a healthy beating heart before canals were stupidly built to redirect the water [something that has proven detrimental but can never be fixed].

It’s hard not to love that part of Florida.

Also hard to imagine it.

So each day I make a point of waiting for that flicker of strange golden light, feel privileged for this peek into the past. And then, in a blink, it’s gone again, and the land is left with nothing but its disguise—a once proud and exotic beast, domesticated, made to tap dance and roll over while wearing costumes, silly hats, masks, taffeta and crinolines.