Sometime back I read a review of How to Catch a Mole  that struck a chord and so I ordered a copy, which then sat on my TBR pile for ages because I’d forgotten what chord the review struck and, well… who wants to read a book about moles??? 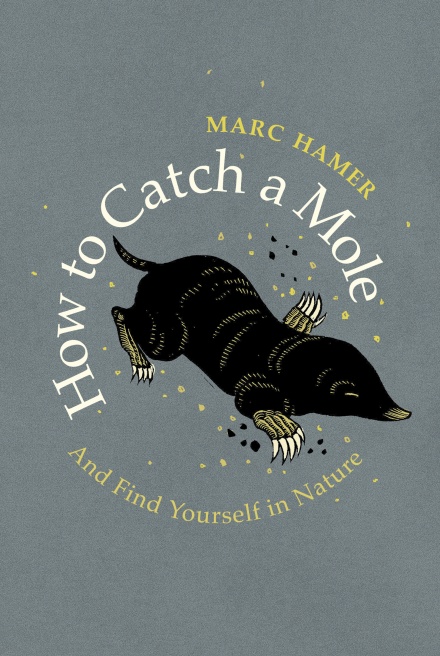 In what feels like chatting with the gardener after bringing him out a cup of tea and then staying, entranced, all afternoon, Hamer imparts his own personal story,  told through his life as a mole catcher. (Please know there is nothing about this premise that appeals to me. And yet, it is one of the most charming books I’ve read in ages.) Promising, at the outset, that if nothing else, the reader will learn a lot about moles (again, this is a promise I have no interest in) he delivers in ways that make you see so many things differently and more broadly and where you want to cringe at the idea of catching moles, he convinces you that it is NOT the most dreadful thing at all. Mostly because he himself comes off as a most gentle, nature-loving soul.

Having begun his working life as an itinerant gardener he was soon asked by clients to please do something about the moles tearing up lawns. He had no idea what to do about moles. And he might have left it there and simply continued the gardening side of things. But he chose to learn. And so it begins, this education, not only of trapping, but about mole mentality and behaviour, and mole mentors and the whole world of mole catchers and the various approaches (vastly different) and how through all this learning of gardens and moles, he comes to a whole new philosophy of life and a deeper appreciation of nature.

“The mole disrupts the artificial serenity of a lawn in a way that is unacceptable for some. Gardening is not nature: it is using the laws of nature and science to impose our will on a place, and for some people this need for control goes to extremes. I once had a customer with a neat town garden who was obsessed with the branches on his gorgeous magnolia tree being uneven — there were more on one side than the other. No living thing is ever perfectly symmetrical, and imperfection is where beauty is found. But this man counted the branches and cut some of them off to try to make the tree balance. He had no vision of what he wanted, he could only see what he didn’t want. “

By the time the man had finished cutting the branches, he’d ruined the tree.

In another story, Hamer tells how William of Orange’s horse tripped over a mole hill causing William to break his collarbone in the fall then suffering consequences that lead to his death from pneumonia, which led to the toast… “To the little gentleman in black velvet” by those of a different political stripe. (In London’s St. James Square there’s a statue of William on his horse and just near the rear left hoof, there is a wee molehill.)

Each chapter is equal parts mole lesson and life lesson.

“To catch your mole, buy three half-barrel traps. You will need at least three. Buy the best and most expensive ones that you can find. Killing a living thing should not be cheap or slow.”

“My mind is losing its need to control the world around me… I forget easily and willingly, and because of this Peggy and I rarely argue, each day begins with a forgiveness for things that may or may not have happened… Healing is just adapting to change, acceptance.”

The book, really, is a meditation on life.

“Healing is not about re-making things as they once were, healing is about acceptance and forgiveness and love and growth and beginning again. Scar tissue is an inevitable part of life.”

“The British Isles saw the first mole catchers around 54 BC: they were Romans who didn’t want their grapevines and other crops uprooted by moles: they wanted to grow unspoiled flower gardens… I catch moles in the same way that the Romans caught them, by learning their behaviour, probing for tunnels, kneeling down and setting a trap.”

“In the Middle Ages mole catchers were vagrants who travelled from town to town looking for molehills on people’s land, knocking on door and catching moles for money.”

And that all the history comes at the end of the book is interesting… and clever, because at that point Hamer has successfully charmed the reader into wanting to know more about the business of, and nature of, moles.

Which may be the book’s biggest surprise. (Seriously, if you read it and are not even slightly charmed by the offering of mole tidbits, please let me know.)

He has since retired and while still regularly asked to catch moles he now happily declines. After all this, he wonders why people don’t just a) learn to catch moles themselves or, even better, b) grow a flower meadow instead of a formal garden so molehills won’t matter.

“The moles don’t need to be killed. The European mole is protected species in Germany and Austria: gardeners there put up with them.”

Above all, the book is an homage to living life, to working, to making a life in whatever way you can or choose to, that ultimately has you respecting life more in the process.

“The small things are the things which in their millions make the world work. The craftsmen, the traders, the men in white vans who bring stuff and fix stuff; the people in the factories who knit my jumpers and weave the wool to make the tweed for my trousers; the farmers — the individual men and women who care for and grow the things we eat and wear, who look after the landscape for the love of it. The steps that we take that lead us to where we are. The small things, the tiny, tiny interactions, are the journey.”