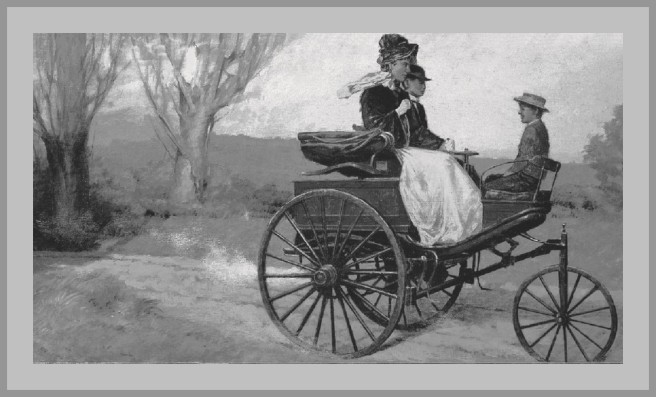 Bertha Benz, was the first person to make a long distance road trip (106 km in an ‘experimental’ Benz ‘motorwagon’, maximum speed, 16 km/hour). She made the trip with her two sons “and without the permission of her husband Karl,” inventor of the world’s first car. Her reason, she said afterwards, was that she wanted to visit her mother but the truth of course was that she wanted to show Karl, and the world, that road trips can be jolly good fun.

May I just add that the the only thing missing from the account of Bertha’s historic outing is what she ate en route because the best part of any road trip is surely the stopping to eat. This is certainly true from memories of my own radishes-and-homemade-rye-bread-koolaid-in-one-thermos-coffee-for-my-parents-in-another-climb-the-granite-boulders-for-a-nice-picturesque-spot-to-eat-overlooking-highway-11-on-the-way-to-Muskoka roadside picnics when such stops were possible… to the can’t-go-anywhere-so-eat-cheese-sandwiches-in-a-cemetery version of more recent times, and a thousand in between and because I honestly can hardly remember a meal in any resto that I’ve loved more than some of those impromptu noshes.

I’m suddenly feeling compelled to write a more complete version of Bertha’s story, one that includes a hamper.

This is not a love post. It’s a pretzel post. Which, really, is almost the same thing. Still, I’m sorry if the title is misleading.

(If it’s love you’re looking for you might want to give this a miss. Unless you love pretzels, in which case I’d definitely say stick around.)

The one in Cambridge, for example, backs onto a pioneer church inside which I found an elderly man reading a paperback western. He was there to guard the church and to answer questions about it. The question I asked was whose land was it before the church came along, indigenous-people-wise. He said he’d never thought about that but now that I mentioned it he did remember when he was a boy (because he’s lived in the area all his life) there was an Indian (his word, he’s from that era) who lived somewhere nearby and one day stole a pie that was cooling on a window ledge. The pie-baker was prepared to be outraged except that the next day a piece of fresh meat was left on the same window-ledge. I asked him if he’d ever read Susanna Moodie. He said no but that he’d get his daughter in Guelph to look her up for him.

Most On Route picnic areas aren’t as exciting as elderly men and their memories, but they’re all very lovely, tree’d and quiet and only a few minutes walk from the gas pumps and fast food. They close for the winter sometime in October. But do look for them on your next journey. They’re quite hidden.

But, pretzels, yes. I’m getting around to that.

As if picnic areas, history, and clean bathrooms aren’t enough of a draw, on my last visit to the (Trenton) On Route (en route to Montreal) I discovered Neal Brothers oven-baked pretzels, which I can’t even tell you how they added enormous pleasure to the not-especially-scenic drive to Montreal but lasted through my stay there (because there is plenty to eat in that city besides pretzels) as well as the drive home.

I’ve since found them in my favourite local grocery shop, saving myself a return trip to Trenton.

Feel free to file this under Essential Road Trip Info. 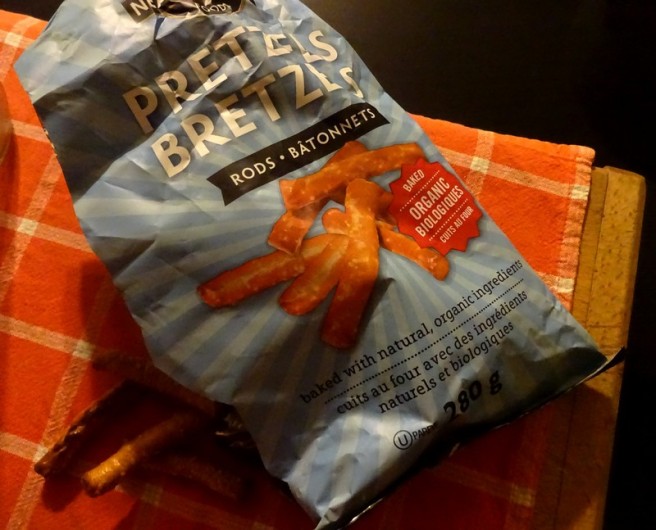 According to Wikipedia, Bertha Benz was the first person to take a long distance road trip (106 km at a maximum speed of 16 km/hour).

She made the trip in 1888 with her two sons and “without the permission of her husband”. Her reason was that she wanted to visit her mother although there are suggestions she actually did it to publicize her hubby’s brand new ‘Benz’ motor car. It worked.

A third reason (unofficial but most probable in my opinion):

What I realized after a recent 3400+ km drive to PEI and back is that a road trip (different from getting somewhere as quickly as possible) taps into a sense of timelessness—the proverbial ‘journey’ versus ‘destination’.

There is still red sand in the car and in my shoes and I am in love with a rock I brought back and I keep playing the tape I kept playing all the way across New Brunswick and then Quebec and Ontario, right up into my driveway.

Laura Smith, it was. Not much of her music available online but if you like this, you will love her.

Something I learned: a good tape is an essential thing for a road trip. Just one. It becomes the soundtrack. (Would love to know your own road trip soundtrack if you’d care to share.)

Other tidbits of road trip lore and Things I Learned In Between the Fine Lines… to come. (And, I hope, to hear, from you…)