Over at Front Door Back Door—I note the moment we felt the earthquake, the sismo.  After that, and the initial wandering about our room in circles—remembering that we’re meant to stand under door frames when things like this happen, not lay in bed under large swinging light fixtures—we (and by we I mean Peter) went back to sleep. He’s from Florida. Disasters

don’t strike him the same way they do me. I read Rilke’s Letters to a Young Poet  instead, which I found oddly comforting and soon felt that all was as it should be. Whatever that was.

Eventually, even I could sleep.

Until a thud happened, that is, so strong it felt like a fat ghost had rammed the bed, all silent and dark and full of power. The first aftershock. I stayed awake from there on out. Florida man went back to sleep.

Next morning, thinking we’d had some pretty wild tremors but that was all, we went about our day. Peter was meeting with people. I planned to stay at

the posada, sit in the sun, work on a chapter. But first I wondered if there was anything in the news; I was thinking maybe something along the lines of: Mendoza experienced those pesky but very normal rumblings again last night; nothing to worry about, folks; all’s well.

Not quite what I found.

I’d say surreal—overused word that it is—is accurate here. Even now, days later, recalling the moment when I realized what had happened in Chile, I feel momentarily stunned. Especially given that we’d only left Santiago the day before and were planning on returning the day after. Half our belongings were still there.

Any return to Chile was out in the foreseeable future. Even leaving Mendoza was getting more complicated by the minute as reporters flocked in, cars and buses being taken to cross the Andes or get to Buenos Aires; people everywhere filling up every mode of transport, everybody wanting to be someplace else. So we spent the day trying to figure out what to do—stay until things calmed down, or get out?

With help from our (new) (bilingual, thank god) friends (who insisted get out was the only option as all things ‘transportation’ would certainly get much worse before they got better), we managed a milk run of connections to Buenos Aires; possibly the last such seats available for at least a week.

And after 48 hours of non-stop travel we were home.

I might mention here that I was reluctant about going to Chile in the first place. It was the long flight that put me off; major excursions aren’t my favourite thing. I like winter. I miss my cats. I work better at home. And so on. For this reason it would logically follow that I’ve spent some time since, muttering I knew we shouldn’t have gone…

But (and no one is more surprised about this than me) the thought hasn’t occurred to me even once.  Not in the moment we felt the tremors or saw the pictures of the chaos in Chile; not during the exhausting two-day journey to get home or in any of the ten thousand lineups along the way—though it did feel annoying—it never felt like we shouldn’t have come. 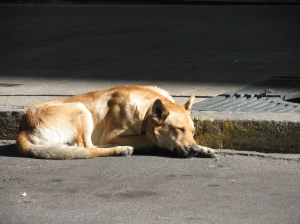 I was puzzled by the absence of my usual inclination to ‘offer an opinion’… Of course shock has a pretty sobering effect generally and can shut you up pretty fast, but it was more than that. It was as if by the time the earthquake hit I’d already fallen in love with too much—something to do with the energy, the quiet pride of the people, the way the land smells the moment the sun sets behind the mountains and how everyone looks at everyone else in the streets of Santiago. You can’t be anonymous, no one is ignored. The perros de la calle, street dogs—owned by no one, embraced by all—that we shared our restaurant scraps with. The giant choclas and noise and laughter at La Vega and Mercado Centrale and 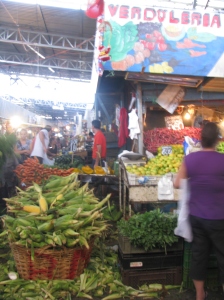 the man who warned me not to wave my camera, to keep the strap around my wrist: carteristas, senora!

I had already fallen in love with the small shops that from the outside look like they sell nothing but on the inside are people willing to climb into attics or the back of storage cupboards to cheerfully find what you need, even if it only costs a dollar. And the man in Chacras de Coria who was thrilled when we stopped to buy a tomato from him for what was about twenty-five cents; we were equally thrilled at the prospect of eating it with buttered Chilean bread (the kind sold everywhere, in shops, on street corners, and especially at toll booths on highways where sellers weave in between cars offering snack sized portions of their own homemade bread in paper bags). And the man working in a garden outside of Santa Cruz who saw me sitting in the sun, writing, and carried over a whole table for me on his head, then went back for an umbrella.

When a stranger brings you a table on his head, you really can’t help but fall in love.

I’m not sure any of the above is specific to Chile or Argentina or any one place for that matter. And I’m pretty sure everything is relative, that I could go back and have a very different time. That someone else could go and find the Mercado Centrale less ‘hotbed of fun’ and more crowded place that smells overwhelmingly of fish.

But then it’s never really the stuff, or the place, is it? With the exception of a a few geographical, cultural and language differences, the important things, the people, are much the same everywhere. We just don’t see it when we’re caught up in our I-don’t-care-for-the-smell-of-fish moods. Change our mood, our habit of grumbling through our days, and I suppose we’d see the important stuff all round us wherever we happened to be—including home.

To my new friends: thank you for extraordinary generosity and kindness.

Carlos and Laura who run  the most beautiful posada this side of the Andes, and who—despite my desire to hide out there for an additional week til things calmed down—insisted we get out and performed feats of almost magic to make that happen.

Fernando, driver extraordinaire (who knows everybody that’s anybody in Mendoza). A wonderful madman who thrives on caffeine and adrenaline, with a heart as big as his country.

And, especially, to Mauricio, in Chile, for showing us his country through a prism we’ll never forget.

10 thoughts on “back from chile”