You may find this surprising, but I can go months and months without ever seeing a border collie. Shocking, I know. And then last week I saw at least a dozen—two of them right in my own neighbourhood. The first, a beautiful long haired black and white running loose down the sidewalk while his human rode a small motorbike on the street in what would be the bike lane if city planners actually planned things. The dog was smiling and his coat was gorgeous in the sunlight and I wanted to take a picture but didn’t think fast enough or, rather, they were moving too fast. They stopped at the corner store just as I, in my car, was turning to go the other way. My instinct was to turn back, jump out, say hello!, tell them how they were a lovely sight and what a great dog and how I’d be smiling for minutes and minutes afterwards. Possibly longer.

But I was late going where I was going so I didn’t.

The very next day I saw another, or maybe the same one. This time walking on a lead held by a human on foot.  Not as exciting, but still… Curious, this border collie ‘invasion’, I thought.

Even more curious coming as it did just a day before we went to the sheep dog trials outside Woodville. (You’re forgiven if you don’t know what the blazes I’m talking about.)

Trial = an event that originated in the UK for lonely shepherds to get together with other lonely shepherds, talk shop and compare herding techniques via their faithful pups (originally a chap’s thing, though now it seems there are as many women as men shepherds) 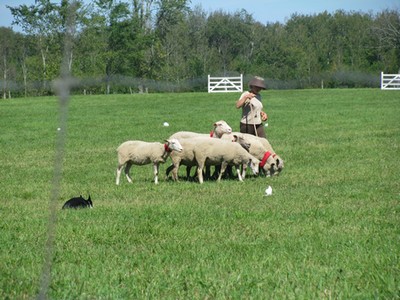 It’s the opposite of animal cruelty, if you’re worried about using animals as entertainment. These are all working dogs, this is what they do every day, and what they love to do—herding is an instinct. The farmer trains the dog to understand directional commands via a high-pitched whistle and so controls the herding process, i.e. the direction they move and which of them are penned or separated from the others (for say, medical attention, milking, or any number of reasons).

How it works—the dog tears across a gigantic field to a group of sheep that spectators can’t even see clearly, herds them back through various fences then runs out to get a second lot, brings them back and deals with any bolters. Then they have to separate them out, five here, a couple there, and finally, get three in a small pen. 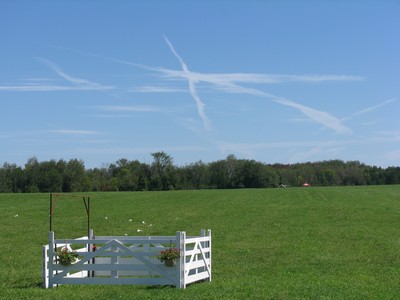 It’s a brilliant, old-fashioned system, one that creates an amazing relationship between farmer and dog, lovely to behold. (You can tell these dogs are loved, to the point they even have their own little splash pools, pseudo ponds, for regular ‘swim breaks’ whenever they like—even if that happens to be in the middle of herding.)

All of this has zip to do with pedigree or appearance. The dogs are of various ages, they might be unattractive, have three legs (there’s actually a famous three-legged one), it’s all about heart and bond between farmer and dog and how much the dog likes his job. Having said that, these are probably among the happiest pups in the world—there’s not one unpleasant or worrisome note to the whole event. In fact, you get the feeling that if humans hadn’t invented trials, border collies would have.

Anyway, a lovely day, made even nicer with a picnic on the grass under a large umbrella, where, I’ll admit, I casually entertained a few thoughts of leaving it all to buy a whistle and start making some serious feta.

The point of this post, in case you’re wondering, has escaped me.