So there’s the one about the guy who walks over, slow like, walks all the way over from wherever he lives on the street opposite the park where Peter and I are clearing litter from the tall grass area and creek bed that never gets mowed. It’s a pretty big space and we have a few green garbage bags already filled. So the slow walking guy stands there, hands in pockets, smiling, and says it’s great what we’re doing. He wants to know if we’re part of a group or something. (What, like the Kiwanis maybe? I’m not sure what he means). No, I say, we’re just  us. He looks momentarily confused, or perhaps it’s just gas, then rattles on about the sin of littering and how it brings down house prices. He asks if we live in the neighbourhood. Nope, I tell him, we’re on the other side of the ravine but we come through here all the time. His hands are still in his pockets. He’s wearing khakis and a golf shirt. Well, he says, bouncing a little on his toes, brightening considerably, why don’t we form a committee, get a group together to clean the area. But we are cleaning the area, I say, we do this all the time. I explain how you can’t just clean it once, it gets messy again very quickly, and how a group, nice as it would be to have company, won’t do any long-term good… better to just have many people pick up a few things on a daily basis. Or do bigger clean-ups on their own as and when they feel like it. I suggest that groups have a way of getting complicated. They argue. People will find ways to disagree about how to pick up litter. We’re not group people, I say finally… but, hey, thanks, and good luck.

He’s suddenly all crestfallen and slightly pissed off and I silently wonder if in declining the offer to whip up a litter committee what I’ve really done is dashed his hopes for whatever else was attached to the plan. (Brain-storming BBQs? Bake-sale to raise funds for garbage bags? Motivational street party with face-painting for the kids and Larry the Litter Loving clown?)

He mumbles something like yeah, right, and walks back from whence he came, hands still firmly planted in pockets.

If a committee has been formed, I haven’t noticed.
The litter continues to fall.
We continue to pick it up.
We’ve never seen the man nor his pockets again.

Then there’s the couple who sit on their porch comparing their lawn to everyone else’s. We don’t have a lawn. We’re weird. And when I walk past the porch-sitters the man says something I don’t hear and I shout back Yes, it’s a lovely day! and he repeats the thing that I don’t understand. I move closer and he says “What’s that in your hands?”

I tell him it’s litter; I say it’s amazing what you can pick up in just a short walk around the block. Ha!  I toss in some laughter to keep it light.

He makes a bad smell face, goes slightly indignant. The woman also, just stares. So now I’m standing way too close to their tidy porch holding a squashed Timmy’s cup and other bits of debris and I realize the exchange has ended, that I’ve been dismissed, and as I shuffle off I wonder how I’ve offended them. Have I caused them to feel guilty for not picking up litter? Or have I simply confirmed their suspicions about the sort-of-people-who-don’t-have-a-lawn? (Beware the Timmy’s cup, the flattened water bottle, the muddy Rothman’s pack… strange powers to unsettle the masses lurk there!)

A friend of mine gathers litter as she walks to work at King and Bay—which is brilliant because the better dressed the anti-litter warrior, the more influence they have in a 100 monkeys kind of way. (Recently I’ve noticed a guy around the corner who takes regular walks with a No Frills bag or two, filling them with rubbish. I honk as I pass. Wave and smile. I hope he doesn’t get the wrong idea.)

Last but not least is the woman who says—in her not-very-sincere-smiling way (and who insists recycling is a scam)—that it’s very nice to pick up litter and all but don’t I worry that I’m taking away the jobs of people who are employed to do such things?

Though I’ve never seen the ’employed’ scrambling through ravines… I call the Town, present my concerns, and am met with laughter.

Followed by reassurance that no one will lose jobs.

Seems there is indeed enough litter for us all.

On the street, in parks, wherever.

You can imagine my relief. 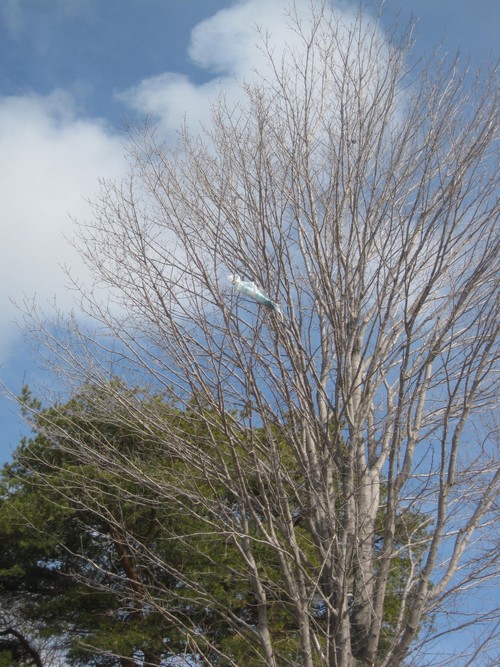 4 thoughts on “a few trashy stories”