There are no pictures.

Well, yes, there are, actually, pictures. The morning before we cut down the ancient juniper, I took a few. They’re not great—not meant to be great—and say far less than the expected thousand words. They certainly don’t say that the tree and I spent the better part of twenty years together.

It was already here when we moved in. Already quite mature with a slight tilt, which, a few years later, turned into a near fatal lean that required the installation of a serious rope and pulley system to keep it from keeling right over. The system worked well, but as the tree grew it continued to totter ever more precariously. Eventually branches began to sag and turn brown and the whole thing just seemed to be struggling.

Though not by us.

Its only real flaw in our view was the increasing potential for a squashed Mr. Reilly, the neighbour’s furry new addition, who likes to play with his chew toys on the lawn in almost the exact spot the behemoth juniper would land if the rope ever gave way.

The truth is it should have come down years ago.

Not the one the cardinals had a nest there. And not the one when the blue jays did. And not in winter when robins [who for some reason no longer fly south] swarm the tree for its berries, which is interesting because there’s no other time I can recall seeing robins do anything en masse. The serviceberries are devoured by one bird at a time. Worms too… one, maybe two robins at the most, wait while I dig over the vegetable bed. No swarms.

But in winter, maybe because there’s less food to choose from and they don’t trust each other to share, or maybe because the berries, when fermented in their bellies make a fine schnapps… they arrive at the juniper tree by the dozens. Thirty, forty birds, easily, at times.

I’ve never captured it on film. You’ll have to trust me.

So now it’s gone. I didn’t watch the sawing. I took pictures and said goodbye and thank you and hey, remember all those crazy robins… good times, eh?  And then I went inside and pickled some peppers and made zucchini soup.

I’m glad they left the stump. There was some talk of renting a stump grinder. I counted the rings. Thirty five. Google tells me this is admirable for a tree of its kind.

In a different world, a wilder one, for instance, in a house surrounded by woods or fields, not neighbours, I would have left this tree to die a natural death, to continue keeping the robins drunk and happy all winter, to be the ancestral home to many more feathery generations, to keel over whenever it bloody well pleased, knowing that wildlife is clever enough to get out of the way.

As it is, I miss the view of its gnarly branches from my window. We’ve planted new junipers in its place, smaller ones, young and cute and strong and straight, but as yet, without character. The birds fly right past. I wouldn’t blame them if they stopped and lodged a complaint… but they’re already adapting to the new landscape. And so, I guess, will I. 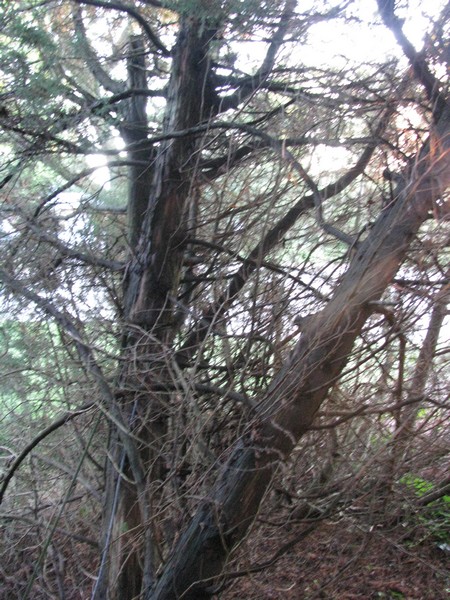 8 thoughts on “when a tree falls…”