“According to the usual pattern, she was educated at home with a series of governesses, and a weekly parade of drawing and dancing masters. Boarding schools, although increasingly popular as the century waned, were considered not quite good enough for gentry, since they were now infiltrated by rich merchants’ daughters in pursuit of the social graces of their superiors. It was much more genteel to be educated at home. The curriculum included English literature, a little geography, a very little arithmetic, and a smattering of languages, particularly French. At least half the time, however, was devoted to ‘accomplishments’, which included lessons in painting, music, embroidery and deportment. ‘Accomplishments’ were considered essential bait with which to trap a husband. Young ladies, after all, were educated for matrimony; there were no careers open to them, although it was considered respectable for gently born but impoverished spinsters to turn their hand to governessing, or to novel-writing.”

~ from The Embroidered Tent: Five Gentlewomen in Early Canada, by Marian Fowler (Anansi, 1982)

Am loving this book. Have read only the section on Elizabeth Simcoe so far, who I was prepared to label an entitled heiress [which of course she was] and dislike her for that reason. Turns out that despite her not so endearing trait of having zero compassion for underlings, or pretty much anyone of ‘lower class’, she was completely and utterly enchanted by the Canadian wilderness and heartbroken when her boring, whinging and militaristic husband John, decided to return to England. Her marriage was pretty loveless but for the [scads of] children [though children at that level of society were no trouble once ‘produced’ as they were farmed out to wet-nurses and nannies and had only a daily appointment with mother] and there’s a suggestion that she either had an affair, or thought about it a fair bit, with a much more upbeat and outdoorsy chap who lived on the shores of Lake Erie.

She was, it seems, a woman once the epitome of British upper class sensibility, raised to be ‘proper’, who discovered the joy of wading barefoot through a stream, who was never happier than when her husband went on extended sojourns, who learned to drive a wagon on her own over rough roads and who was only too happy to give up the daily round of social engagements and fancy dress balls she once enjoyed in order to watch eagles soar, seasons change, to paint fearlessly on the edge of Niagara Falls as her tight, precise watercolours changed to a wilder and freer style. She could have lived anywhere in Upper Canada but chose to build a home, ‘Castle Frank’, near the Don River, in a spot that, at the time, was no where near ‘civilization’. And then she obligingly gave it all up to return [at her husband’s insistence] to ‘society’ back in the U.K. where she ‘did her duty’ but apparently never completely embraced that world again…

Some of her paintings are in the British Museum, others, in the Province of Ontario Archives. 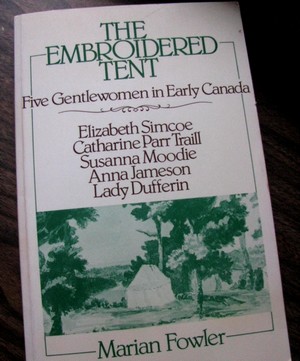 Read this for origins on the word spinster.

5 thoughts on “impoverished spinsters may apply”