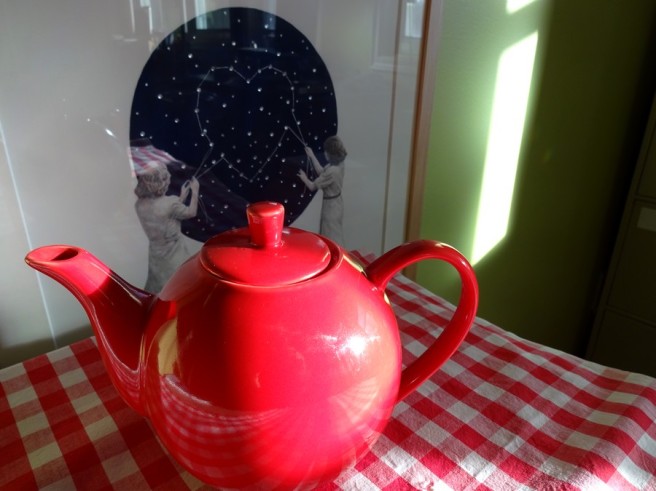 Teapot in excellent company…  sunshine, pickle green walls and art by the amazing Toni Hamel — only a sliver of a piece called Star Charting — hard to see its beauty because of sunshine, but the effect of it makes me ridiculously happy for all it represents today on a personal note…)

To beautiful friends, and the community of courageous, wonderful women everywhere…

And here’s a little gift from Barbara Leigh Smith Bodichon, an early women’s rights defender in England, who in 1854, published something she called the Brief Summary in Plain Language of the Most Important Laws Concerning Women. Because of her work, and the work of others with her, laws began to change as the Married Women’s Property Act was passed in 1866.
(In case the UK is still looking for new faces to put on their money.)

“A man and wife are one person in law; the wife loses all her rights as a single woman, and her existence is entirely absorbed in that of her husband. He is civilly responsible for her acts, she lives under his protection or cover, and her condition is called coverture.

“A woman’s body belongs to her husband; she is in his custody, and he can enforce his right by a write of habeas corpus.

“What was her personal property before marriage, such as money in hand, money at the bank, jewels, household goods, clothes, etc., becomes absolutely her husband’s, and he may assign or dispose of them at his pleasure whether he and his wife live together or not.

“The legal custody of children belongs to the father. During the life-time of a sane father, the mother has no rights over her children, except a limited power over infants, and the father may take them from her and dispose of them as he thinks fit.

“A married woman cannot sue or be sued for contracts—nor can she enter into contracts except as the agent of her husband; that is to say, her word alone is not binding in law…

“A wife cannot bring actions unless the husband’s name is joined.

“A husband and wife cannot be found guilty of conspiracy, as that offence cannot be committed unless there are two persons.”

And this, from Sonja Boon, who reminds us that we’ve come a long way but still have much to do.