Whether reading her blog Pickle Me This, her essays or short fiction, The M Word  or trash writing... I’m never disappointed with Kerry Clare’s style… that kind of literary voice that feels conversational, as if what you’re reading is something you could also be hearing over lunch with a friend.

Mitzi Bytes  is no exception. You lean forward into the pages, waiting for the next thing, the next laugh (Oh my god, the No Angle tatoo!), the yes yes, I get that!,  or the next bit of outrage and when it comes you lean 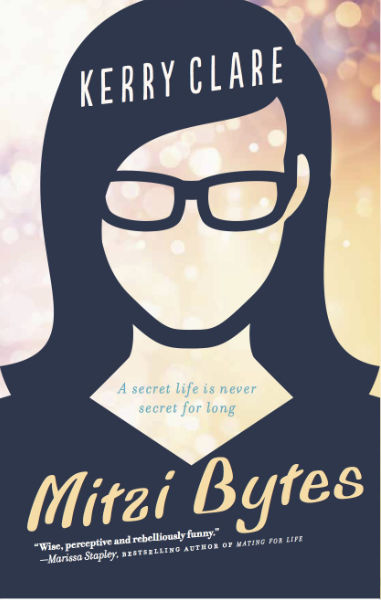 back, take a breath and wonder how you’ll figure it out, this problem, this mess of a situation, whatever it happens to be, because by this point you are totally signed on.

Clare excels at writing about the ordinary, which happens to be one of my favourite subjects. She draws the reader in with wide open, honest emotions and isn’t afraid to say this is the truth as I see it  in exactly the way you hope the best of your friends will always say things.

In Mitzi Bytes  she writes about blogging, which is really about noticing.

Sarah Lundy is someone who notices. She’s the person behind a popular blog called Mitzi Bytes. She’s also the author of some very successful books, compilations of her “domestic tales”. But it’s the blog where her notoriety lives, along with her candid, often bitchy posts, which she writes anonymously and which mostly centre around the people in her life, none of whom, including her husband, have any idea that Sarah and Mitzi are one and the same.

Until a comment comes through the site saying she’s been found out.

This is where we meet Sarah, on the verge of her world imploding. She has no idea who would want to do such a vile thing… no idea mainly because the options are many. After all, she’s made a career, literally, of mocking and judging others. (But to be fair, she has also mocked and judged herself in the process.) The *who* of this threat is only one part of the mystery the book sets out to solve. The other is how Sarah’s world became this vulnerable to attack in the first place… not to mention what, exactly, she’s hiding, protecting, and afraid of losing.

But, really, it’s about so much more. It’s about living online, the need to share every thought through a keyboard, the way of virtual friendship and the reality of remaining angry, afraid and alone IRL.

It’s about children and marriage and the effort of not losing oneself (or one’s melon baller). It’s about the history of blogging and the way history is recorded.

“She was thinking of the mother of the baby in the bathtub… Of all the men in towers supposing they were conducting the business of the world, imagining themselves to be the foundation civilization was resting upon–financial markets, circuit boards, and machine guns. Systems to which libraries of multi-volume encyclopedias had been devoted…. while women’s real lives, the stuff of life itself–blood, milk, sweat, tears, and the burn of fevered foreheads–was deemed inconsequential, or even worse, these stories weren’t acknowledged, weren’t even written down, let alone read, reviewed, history continuing on as it had ever been, delivered by the pens of men.”

And it’s about the kind of insecurity society breeds and the way the internet is a place to pretend we’re someone other than we are. Sarah Lundy represents all of us in a way, the part of us that’s just trying to clunk its way through life. What Clare does so well is show us this process in a way that we see Sarah and also see ourselves in  Sarah. We recognize the insecurity in her railing, know that it’s the frustration of powerlessness. The question then becomes: why do we give our power away?

A lovely read. And so discussable. Book club or lunch, you choose.

at Blue Heron Books and at Hunter Street Books.

Two of my favourites. (Support indies!)

4 thoughts on “this is not a review: ‘mitzi bytes’, by kerry clare”