Here is my entire lifelong experience of baseball:

In gym class, being the last person to be chosen for the team, always.

Nieces and nephew who played baseball.  (Oh, did they? I only recall attending one game and being totally confused by everything including why all the parents were yelling.)

Children of nieces and nephew who currently play baseball.  (If they’re happy I’m happy for them… yawn.. It’s still not my favourite outing but I bring my camera these days and that makes it better. Here’s a pic I took at a recent game. I call it: things I’d rather be doing than watching baseball.)

The World Series, 1992.  (Even I contributed to that decibel level.)

The one Jays’ game I’ve attended.  (We had excellent seats apparently but it didn’t help the tedium. Have blocked out the details. Nothing to report.)

Two friends and one house painter who rhapsodize about the religion of baseball. (The earnestness of their comments has stayed with me for years and keeps me oddly curious about the WHY of whatever is the game’s draw.)

And then into my life falls The Utility of Boredom, a collection of essays, which (to my complete surprise), explain so much, not the least being that boredom is integral  to the game—it’s an actual thing,  like the space between notes played on a piano, that part of the beauty of baseball is that there is time for climbing trees. The theory is Forbes’… the analogies, mine.

Forbes’ style is casual, anecdotal, written with a wide knowledge and deep passion for the game yet readable on different levels, depending where you are on the baseball knowledge continuum. For neophyte me, it was all pleasure of discovery and details that will forever stick, like how baseball is made for radio in a way that doesn’t work as perfectly for other sports, how the rhythm of it allows you to have a game on in the background as you go about your day and you don’t miss a thing.

It’s an oddly comforting book. And I’m not even sure why I’m choosing this word, but it’s the right word. I enjoyed the reading, enjoyed having my eyes opened to the ‘comforts’ this game seems to offer its fans. 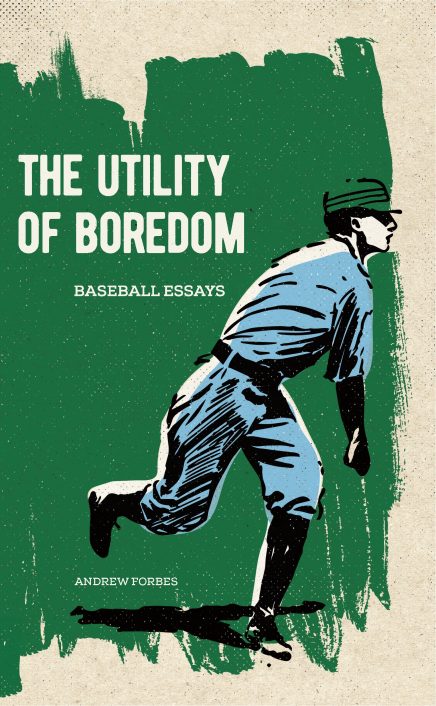 In ‘Sanctuary’, the opening essay, Andrew Forbes explains his own introduction to baseball and that feeling of safety and the-world-suddenly-makes-sense  vibe inside a ballpark. ‘Jim Eisenreich’s Eyes’ is about finding a morality trigger from a baseball card. ‘Ballparks of America’ is a surprisingly beautiful tribute not to the stadiums and their legends but to the towns and the people that define them, delivered in bite-sized morsels.

“In Sanford, Maine, a woman tells you what the mill closures have done to the town and how there are no tourist dollars because Sanford is so far inland. Orchard Beach catches all the tourists. But Sanford has its little ballpark proudly bearing a ‘Babe Ruth was here’ plaque…”

“In Seattle, from your seat high up in the Safeco Field stands, you can see Mt. Rainier as well as Felix Hernandez. Both are astonishing…”

I very much doubt I’ll ever be a seamhead (baseball fan) or even enjoy watching a game, but neither will I ever again doubt the sincerity with which those who love the game love it. Also, I believe it’s important to understand The Other… and though sports remains a weird thing to me, The Utility of Boredom has gone a long way to explaining its appeal on a deeper level.

“Boredom, in the baseball sense, is a synonym for lackadaisical; it’s the only proper response to all that green grass and blue sky. Slouchy in the Viera stands, the beery patrons were in no hurry to shake the peanut shells from their hair and return to real life. They wanted to sprawl over those sticky plastic seats for which they’d paid. And the players—the unknown pitcher on the mound palming the ball mindlessly, the batter stepping in, stepping out, stepping back in, adjusting his cup, a batting glove, his helmet—were happy to oblige.

“This is where good radio announcers truly shine: filling the space. I once heard Vin Scully…. describing a cloud over Dodger Stadium and it was the most riveting and moving 30 seconds of the the entire broadcast. It’s for this reason too that baseball became a game of such minute statistical detail: that folks at microphones should have something to say when there was nothing to discuss and nothing happening on the field.”

So glad I stumbled upon this.

I wasn’t disappointed in the least.

Nor bored for even a moment.

(&, honestly, no one could be more surprised about that than me.)

One thought on “this is not a review: ‘the utility of boredom’, by andrew forbes”