I have no idea where I got this book nor how it came to be included in my winter reading. I haven’t been talking to anyone about Newfoundland or outports and the only aquatic thing I’ve had on my mind recently is the Georgian Bay trout we get via a local fisherman. But there it was on my To Be Read pile so I casually opened it and wondered if (assumed that) Claire Mowat was related to Farley. She is. His wife. And it was with Farley that she lived in an outport on the southwest coast of Newfoundland from 1962 to 1970.

That pretty much right there is the story. Except for the details. Because life in an outport, apparently, is/was not heavy on drama, intrigue, or big-time action, but details… oh yes. Oodles.

An outport, by the way, is a small, isolated fishing community almost always without roads. Access to ‘anywhere’ is by boat only, which means during the LOOOONG winters… there is no access to ‘anywhere’. Due to their isolation these communities became a lifestyle unto themselves and in their own way thrived up until the 1970’s when outside influences entered into things and changed that lifestyle (not for the better), after which residents were given incentives to move inland. Many moved entire houses, floated them along the coast, because they had no money to buy new. And a way of life vanished.

Mowat was there, unknowingly, for what would be the last decade of that old-world outport life. She shares those remnants by being an excellent observer of nuance and keeping herself in or out of the story in all the right ways. 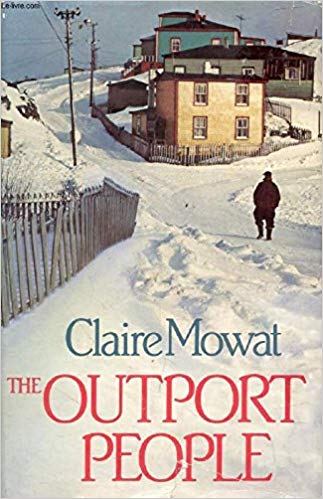 fictionalized bits are names and the occasional need for artistic license in order to make whole cloth of the ‘details’ and shape the story. Capturing the essence of this now lost way of life was, after all, the point of writing the book, something that’s clear from the reading. You can tell Mowat was truly in love with outport life and deeply respectful, in awe even, of the people who lived it.

What comes off as most extraordinary is that they, the residents, seemed oblivious to the increasingly modern world going on around them. More importantly, that’s pretty much the way they liked it. Most people never once in their life set foot outside their remote community and when then did, didn’t much like what they saw.

“In 1939, when war broke out, Ezra was one of the first men in Baleena to volunteer for service in the British Merchant Marine. He was then close to being fifty years old. He made many stormy crossings of the North Atlantic in submarine-hunted convoys, oiling machinery in the throbbing engine room of an ancient freighter. In the port cities of England he first encountered a way of life that was not the way of Baleena. He had never seen so many buildings so close to one another and he marvelled that human beings could bear to live like that. No one ever invited him into a house there, and the pubs and teashops he visited were damp, chilling places that numbed your feet and soul. He was never warm in England. Even the poorest house in Newfoundland, he reckoned, had a kitchen that was warmer than an English castle.”

Once that ‘modern world’ began creeping in via telephones and televisions in the mid to late 1960’s (but remained a rarity in most homes); when the post office was rebuilt and the postmaster of 35 years, who knew everyone by name, retired and was replaced with a key to your own P.O. box so that there was no one to speak with at what used to be a communal hub; when the occasional car began to appear and the fish began to disappear along with the fish plants along with the young people who could no longer hope to make a living, changing the cycle of families so that elderly parents who were once cared for by their kids were now left to grow old alone…  nothing was ever the same or as good in its maybe-it’s-crazy-but-it’s-worked-for-generations way.

But all this comes at the end of the book and the end of the decade. By which time Mowat has painted a picture of a strangely beautiful world… beautiful despite the fact that no one has more than a few dollars at any given moment,  no reliable medical services, no actual shops (back to no one has any money to buy anything), limited food sources, and despite the howling cold weather and brutal life of families who fish for a living or work for the fishing industry (and receive ridiculously little $$ for it)… despite all that and more, there’s a warmth, from the people themselves, from the way they share what little they have, looking in on neighbours to make sure they’re okay, the way children have ten thousand chores but are also free to run and play and discover their enormous yet tiny world because there is nothing else, not a single other thing, to distract them. There’s a complete absence of fear (other than what weather and sea and fishing companies pose).

And the colours! in this grey landscape where no deciduous trees exist… the bright shiny orange of kitchen walls, a red painted floor, yellow table, lime green chairs, a turquoise exterior. (The fishing boats, however, are all proudly dory buff. A kind of beige. Which makes no sense to me… I’d have thought it would be an advantage to have brightly painted boats.)

Mowat also notes cultural peculiarities, what is considered polite conversation, the way it’s absolutely normal for anyone to walk into anyone else’s house and sit down, almost always in the kitchen, and talk or not talk. The tradition of mummers, the difficulty of unions in environments made up almost entirely of closely linked families, what’s important to people, most of whom, have never been or even seen pictures of… anywhere else.

“The economic history of Newfoundland was a subject as taboo in their house as a discussion about religion in Belfast.”

“The Roses’ children had long since left home and their house, which once had had two storeys, had been decapitated. Removing the second floor of a house was a common alteration made by elder couples since it reduced both the amount of fuel need to heat it and the housework needed to keep it clean.”

The book feels like listening to a friend tell the story of living eight years in a place she was initially only curious about but came to deeply love… including, and maybe especially because of, the tough moments. And what’s more brilliantly beautifully Maritime than that?

(All of which aside, I’ve read that in some cases, residents of Newfoundland outports have not found the book as charming as mainlanders have, but that may be a case of being in the forest, unable to see the beauty of the trees. There were occasions Mowat outlines, where residents wondered why she was taking pictures of the water or the boats, things they found so ordinary. There is also the possibility that residents interpreted Mowat’s ‘details’ of outport life as being meant to be demeaning, when in fact it’s all about respect, admiration and awe, with more than a dollop of envy.)

“I wondered if anyone [on the mainland] ever stopped to think, as they laid the fillets in the pan, about the men who had caught them, or the people who had cut them and packed them, or of the risky voyage[s] made to bring all this fish to them. Only rarely do we think about the complexities of the production and distribution of food. It is so mindlessly easy to ignore the human involvement when we simply reach into a freezer.”

2 thoughts on “this is not a review: ‘the outport people’, by claire mowat”