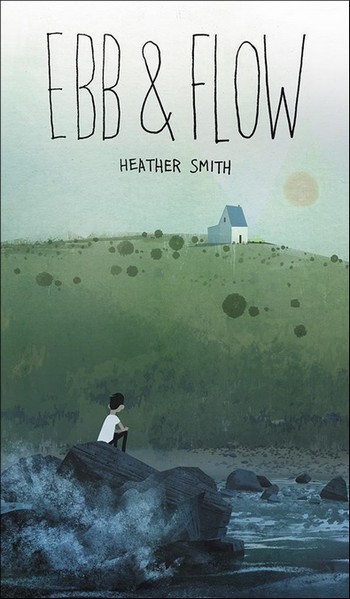 Written in free verse, Ebb and Flow took a few moments to fully enter into but once I did the rhythm had me and the dread of a free verse story disappeared into pleasant reading (reminding me of the same apprehension followed by pleasure with Pamela Porter’s wonderful book, The Crazy Man).

Ebb and Flow is the story of twelve year old Jett who, with his mother, moves to the mainland (from their home in the Maritimes) after his father is sent to jail. This, his mother thinks, will be a fresh start, for both of them. But what happens instead, Jett meets a lad his own age, Junior, who lives in a small shed with a father who is both physically and emotionally abusive. As a result Junior has become angry and destructive, getting into constant trouble and is disliked and distrusted by the community. Soon Jett is getting into trouble with him and eventually he finds himself stealing money from the one decent person he’s befriended, Alf, a grown man who is gentle and trusting and has the mentality of a toddler. His betrayal of Alf fills him with shame, and yet he continues his petty crimes and misdemeanors with Junior until his mother sends him back to the coast to stay with his gran to try to forget about everything bad that’s happened and because she doesn’t need the chaos as she gets her own life back together. Happily, his wonderfully eccentric grandmother has a way of helping him without him realizing it, and rather than forgetting, Jett finds himself recalling the truths of his rotten bad year and begins to heal from it.

Piece by piece
she filled my hands
with the sea glass

This one’s from the fifties, she said…

It spent years
caught in the ocean waves.
It was tossed around
and beaten down,
until finally
it washed up on shore.
Now look at it—
what was once a piece
of broken glass
is now something better—
it’s a gem.

Even after all that battering?

Grandma smiled.
Because of all that battering.

One very big truth Jett comes to realize is that Junior’s real name is Michael after his father… but, Junior says….

It’s a beautiful moment and the turning point of the story as Jett realizes there are reasons people are the way they are. A powerful lesson for any age.

And all of it told without a hint of saccharine.

There is much to love here.