Remember her? The story by Barbara Cooney about a woman who sprinkles lupine seeds as she goes about her days – her contribution to making the world a more beautiful place. 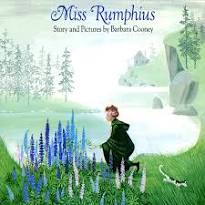 The story is based on a real person, Hilda Hamlin, who immigrated to the U.S. from England in the early 1900’s.  Some lovely info on her (and lupines) here.

The idea of sharing joy.

How is it possible not to relate?

Every time I blow the fluff off a dandelion I think of grateful bees. And the stones that have been painted with messages and left everywhere during the pandemic or the domino effect of a kind word to a cranky cashier or leaving money in a parking meter as a happy surprise for someone you’ll never see

– all variations of lupines.

I’ve been (again) paring down my bookshelves. This is a regular thing but I’m being more ruthless than usual and finding treasures to both read (why haven’t I read this??? I keep asking) and to part with. Some are donates, some are for a library I manage in a women’s shelter, others shout out the name of someone I know and demand to be taken or sent to them. This last part feels slightly lupiney if lupine work is meant to be something that feels good in the process of spreading smidgens of happy surprise.

I’m also going through old photos and finding things I no longer want to keep but that might mean something to someone else. The picture a friend sent decades ago of herself and strangers (to me) at an outback pub in Australia where a handwritten sign on the porch informs that a bush band will be playing that night. The band isn’t named. People sit outside at picnic tables and a young tanned girl, long blonde pony tail and red shorts, is running bare-chested, while another, older girl, twelve maybe, stands primly, shyly, in a below the knee length calico dress and ankle socks next to a man in a cork hat. Both look warm and not recently bathed. The pub is made of roughly hewn wood, thrown together in the middle of what looks like scrub land, a mirage you’re thrilled to come by for a cool one, and maybe a snake sighting while you sip. I’ve sent that photo back to my friend and can’t wait to hear the stories attached to it. Maybe I’ve heard them before… but it’s been a while.

To a nephew, now grown with his own family, I’ve sent a series of pictures I took when he was ten or so and skipping stones at the beach, complete with a final shot of him, both arms up in the hooray! position. His son plays baseball, thought maybe he’d like to show him where he gets his throwing chops from.

And the blank postcards I’m finding in albums. Sunsets and trolley cars, adobe houses. No point in keeping them, so they too are being sprinkled like lupines, with messages scrawled on the backs that sometimes relate to the images on the front and sometimes don’t.

It’s brilliantly fun this finding and sending, apropos of nothing, attached to notes that open conversations that would never have been had otherwise.

So… Dear Miss Rumphius:  thank you.