So the other day I was repairing clothespins.

Because, yes, I hang my clothes on a line. Two lines, actually. In good weather, outside, on a circular thingy. And in bad weather, or in winter [for everything but sheets, which go outside year-round], a line in the basement. The clothespins I use are wooden, held together with an ingenious metal squiggly [there may be an even more technical name for it that I’m unaware of]. It delights me to what is probably an unusual degree that somewhere there is a factory making these tiny works of art, that they are still necessary and that [while they’re also made in plastic] for the most part they haven’t become scientifically enhanced, engineered or in some other way ‘improved’.

There are the dolly peg kind as well but I never got the hang of using them. As a child I was taught the art of laundry, using the wooden/metal squiggly kind and it would be like breaking rank… plus, to be honest, they annoy me because once they break it’s finito la musica… They can’t be repaired.

Unlike the avec metal-squiggly version.

Which brings me back to my point.

I was sitting at the kitchen table, fixing a basket of broken clothespins and thinking: well, this is pathetic. Shouldn’t I be doing something grander than this?? Shouldn’t I be at work on that next great novel, the one that will allow the world to continue turning? Shouldn’t I be penning brilliance of a poetic or opinionated nature, blazing trails in form and incomprehensible voices with short fiction, or hammering away at something entirely made up, like creative non? Shouldn’t I be painting? Or compiling something? At the very least, shouldn’t I move that bag of leaves to the compost?

And as much as logic wanted to say damn right, another part, much brighter than logic, kept insisting that, no, these clothespins were where it was at right now and that these few moments of tending to something so mundane were to be relished, that there was a gift in the seemingly ‘backwardness’ of this kind of work. I thought of my dad, a master of fixing things; he’d prefer that route any day to buying new, and it had nothing to do with saving money. It just pleased him to take the time to repair something. There was the satisfaction with the end product of course, but it occurred to me as I mended those pins that part of what he enjoyed may well have been the meditative quality of mindless but worthwhile tasks… the sort of thing we’ve gotten out of the habit of doing in our never-ending search for faster, better, easier, more—as we get sucked into thinking we don’t have time for this sort of thing in our clever-clever Jetson world—but if we’re honest we waste more than mere minutes doing a lot less of value… it’s just that we do it with things shinier than clothespins. 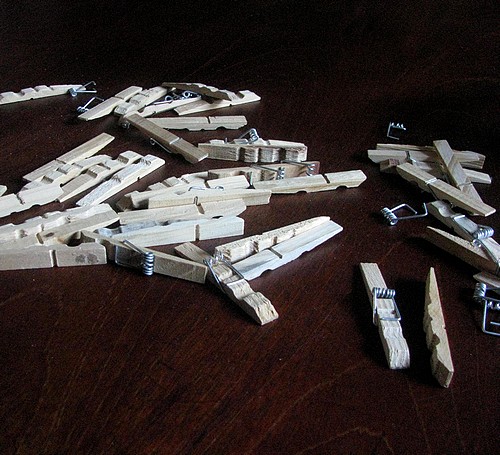 8 thoughts on “pinning, pining and penning”