Academic approaches to writing are never my favourite way to tell a story, but in the case of Karyn L. Freedman, Professor of Philosophy at the University of Guelph, it works. Indeed, she may be exactly the right person to have written this-book-that-needed-to-be-written. While it surely must have been tempting to veer too much in one direction or the other, in One Hour in Paris. Freedman has managed, for the most part, to balance facts and eye-opening statistics with what feels like heart on her sleeve honesty about the extreme emotions following a brutal event.

The book is about rape. 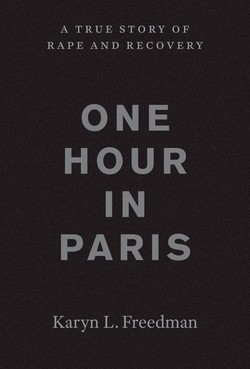 But that’s merely the grit, the sand in the shell that gets things going. The pearl that emerges is a story about trauma and how it can be experienced in as many ways as there are people experiencing it. Freedman’s analytical take on the subject works insofar as presenting a case for PTSD through her rape experience and showing us how society’s focus on the rape, or indeed any ‘incident of violence’, instead of the resulting trauma, diminishes the understanding of violence, undermines the victim and slows or even prevents healing.

In other words, we don’t tend to take these things seriously enough. Especially the lingering and messy aftermath of trauma. We give it an acronym, attach it vaguely to returning soldiers or first responders in newsworthy events. We sincerely hope they ‘get over it’, ‘get better’. But acronyms and hope don’t help. Trauma is hard enough to understand for those who are living with its effects without having to deal with the assumptions and judgements of those who have not experienced it, or who may have experienced it differently.

I’m not sure I would have been able to write that last paragraph before reading Freedman’s book. The way she explains the clinical aspects of trauma has given me a deeper and more practical understanding, not a more emotional one, and for that I’m grateful.

Freedman was raped in Paris on August 1st, 1990. The date is repeated throughout the book, to a degree that becomes slightly irritating, until one realizes that’s the point. She can no longer approach August 1st without remembering what happened. The date is embedded in her memory. She doesn’t need reminding. But reminders are there. Every year. And so by virtue of this repetition she shares with us the ‘irritation’ of not being able to forget something she can’t bear to think about.

She writes about the rape, what happened after, emotionally, professionally, how her father was instrumental in helping her case in ways that many other victims would never experience. For instance, the French government flew her back to Paris (from Winnipeg) at their expense in order to proceed with the case… a case which ultimately saw her compensated financially. While the benefit of such privilege tends to suggest that her trauma has been ‘resolved’, what it actually does is ask the question: what about the women that are raped and/or abused every day, citizens and visitors alike, for whom nothing is ever done, many of whom don’t even know who to tell or how to be heard or believed, much less be compensated and see the perpetrator sent to prison. It’s easy to start thinking that for women who receive this kind of privilege, it’s done. But Freedman is quick to point out that it’s not done. She knows she’s privileged, that this is not how it is for everyone. But all that is almost beside the point. The money, while substantial, is a token, the incarceration is merely fair. None of it is closure.

What’s needed is understanding, by society, a change in how we discuss issues of sexual violence against women, and how we understand the very real effects of trauma on the body, mind and spirit.

“… the sense of responsibility held by many rape survivors is at least partly driven by a dominant worldview regarding personal safety and harm. Although this picture is slowly changing, historically, at least in the West, girls have been taught from a young age that the world is basically a safe place and that so long as you are sufficiently careful and intelligent, you can protect yourself from any serious harm.

“Underscoring this narrative is the fact that in our entertainment-saturated media culture, the everday-ness of sexual violence against women is overlooked in favour of sensationalized stories of extreme violence. And because rape is typically experienced in private… the clear evidence of its pervasiveness is obscured from our collective vision….

“So how does the rape survivor reconcile this dominant worldview with what has happened to her? After all, it cannot be true both that the world is a safe place and that you were raped, unless, of course, the rape was your fault.”
**

Any quibbles with the book are insignificant to the larger message.

One Hour in Paris is available online at Blue Heron Books. Support indies!

3 thoughts on “this is not a review: one hour in paris, by karyn l. freedman”