While each of my Not A Review pieces are distinctly not reviews to varying degrees… this one is REALLY not   a review. I haven’t even finished the book. Which is part of this particular Not a Review’s angle.

It seems I have a sort of love/huh?? affair with Anne Carson’s work, of which  I’m only beginning to know. I’m drawn to it, get angry around it, leave it, then I come back and make tea and snuggle up with it again, blissfully content in my confusion until it all becomes too much. And the cycle continues. The addictive element appears to be the occasional bouts of holycrapletmereadthatpartagain! that come over me. In a good way, I mean. (Because there are plenty of moments when I have almost exactly the same reaction in a bad way, as in holycrapwhatthe#@*#isshesayinghere??? )

Is it just me or is there a certain type of poetry that feels like it comes with a fence and a Keep Out sign? Stupidly you stand there thinking it can’t mean you and so you holler let me in!!  Leaping up and down, you try to see over it, try for even the tiniest glimpse but you’re sweating and your feet hurt and you start to wonder: is it supposed to be this complicated?  Is maybe the fence greased?? So it’s in all seriousness when I ask: is there an actual category of poetry designed to make it seem more pleasant to gnaw off your own hand than to turn one more page?

Not that I’m saying I feel this way about Anne Carson. No no no. True, there is the huh?  part of things, but there is also love. (I’m here aren’t I?)

And what I’m happily not reviewing today is Plainwater, published in 2000, and whose entire first section (called ‘Mimnermos: The Brainsex Paintings’)
I skipped because of things like this… “Yes lovely one it’s today forever now what’s that shadow/ unzipping/ your every childfingered wherefrom? ”

I just wasn’t in the mood for all the leaping. 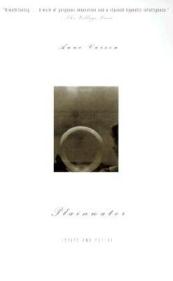 What I did instead was zip ahead to the last section, ‘The Anthropology of Water’, which consists of various pieces, essays… to which I’ve been happily returning each morning for the past few days, champing at the bit to pick up where I left off in ‘Kinds of Water: an essay on the Road to Compostela’, wherein Carson and her travelling companion, identified only as My Cid, walk the Camino, musing on what it is to be a pilgrim, to thirst, to question, to live with faith, or not. To live among people. Or not.

“You come to understand travel because of conversations, not vice versa.”

It’s said, she tells us, that a traveller becomes addicted to the horizon. She tells us that she is a pilgrim, not a novelist, “and the only story I have to tell is the road itself.”  She compares this with telling a story through a character, the difference being that a character moves. “He changes according to the company he keeps…”

“… it is an endeavour as old as civilization to set out on a road that is supposed to take you to the very end of things… What do you find there?… Who would you be if you knew the answer?”

She’s writing about the Camino. Or is she? The layers are uncountable.

I was sad when the road ended. But then, it doesn’t really. That’s kind of the point.

So, I approached the fence again. I dipped back into that first section and I’m glad I did but thank god for google because I didn’t know Mimnermos was a Greek elegiac poet from 600 something BC and while I normally wouldn’t care, Carson makes me care.

And all the sections in between… The one that contains miniature essays on orchids and rain and Sylvia Plath. On walking backwards and Ovid. And the section that is a long poem, which seems impossible, and the one after that—poems on various kinds of towns.

Could it be that we come to understand because of caring, not vice versa?

After all, the writer’s job, the poet’s job, is not to clarify, but simply to make us care.

The copy I’m reading is from the library. This won’t do. Where once I thought I might not even read the whole book, it now seems I’ll be calling my bookseller and ordering my own Plainwater. To love and to huh?  my way through as the moods take me. But then this is the way of love and huh?…

4 thoughts on “this is not a review: ‘plainwater’ by anne carson”