I can’t always say how it is that a book comes to my attention but with Fishbowl  I do remember that ‘must read!’ moment. Mind you, I use the word ‘remember’ loosely… it’s more like I have this vague idea that someone whose book sense I value posted somewhere how she was giving this book to everyone she knows for xmas… I could list a few possibles of who that might have been but then everyone’s friends would be living in hope of receiving a copy. 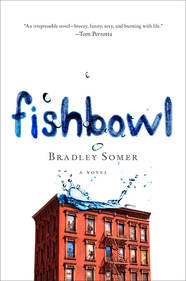 Because to get Fishbowl  as a gift would indeed be a happy day.

What we have here is an exceedingly readable, well-written book whose story takes place over the course of thirty minutes. We begin with the knowledge that Ian (resident of the fishbowl) will (only at the end of the book) fall off the balcony of his twenty-seventh floor apartment and will pass all twenty-seven floors in the process.

Not only an interesting set-up but in just a few pages Somer has managed to make Ian the goldfish someone we care about… with aquatic information such as the length of a goldfish’s memory (what memory?) and bits of fishbowl zen: “Less thinking, more doing” is the goldfish’s philosophy. “Having a plan is the first step toward failure,” he would say if he could speak.

After we learn that Ian *will* fall… the book, essentially, is our introduction to a few people living in the apartments that Ian will pass on the way down.

By the time he falls, we’re hooked. We want to know about Petunia Delilah and her impending baby, her future; about Herman, home schooled, weird, wonderfully naive and easy to swoon; Connor the bastard who dates far too many women (and on whose balcony Ian lives so that he doesn’t stare at the doings in Connor’s bedroom); a construction worker who likes to dress up; a lonely building superintendent; an agoraphobic phone sex worker.

The characters, despite their tics, are represented as fairly ordinary. It’s not about the tics. The point, instead, is that we all have peculiar elements to our lives. Their stories, not their quirks, are what keep us reading… (that and the dry humour, and sentences that consistently offer up happy surprises…)

“The elderly couple, with no pressing engagements after the funeral service, even visited her in the hospital. They brought her flowers and chatted with her for an hour, their manners as impeccable as any hero’s in an old science fiction book.”

The bigger story is how we feel at the end of the book and how we might understand the wider world just a titch better. For a moment anyway.

A credit to the author that a single fish could do so much.

And even if our vision of the whole wider world isn’t altered, then maybe this:
I dare you to look at an apartment building quite the same way again. 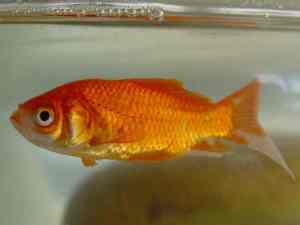 (my vision of Ian; courtesy of wikicommons)

6 thoughts on “this is not a review: ‘fishbowl’, by bradley somer”