If this is your first time at Matilda, hello and a thousand welcomes
and may I refer you to this by way of explaining any potato references.

For others, for those who know about the couch thing  and are here anyway, noble troopers all of you…. cheers!  We’re obviously kindred spuds.

All of which to say… the potato couch  files continue… aka things that happen in an empty room filled with couches of various dimensions.

For example, the other day someone I know drops by and we sit chatting on the couches in the centre of the gallery, which are, indeed, part of the exhibit… and then we notice a few people looking at us as if maybe they’re wondering if we’re  actually part  of the exhibit.

And I think in a way we are…

Then on Saturday someone tells me about a beloved airedale terrier, who had a favourite spot on the couch and how the oil from its fur just ever so slightly marked the upholstery and although the dog is no longer with them and the stain isn’t something anyone else would even see, they see it still. That this  is the story that comes to their mind when surrounded by the couch pics… makes me just so glad I took them.

And then someone else leaves a note about how when they were thirteen their dog jumped onto the couch beside them and landed in their bowl of ice cream.

Two dog stories. Coincidence? Or are dogs and couches a thing?

On a different day entirely when, on the wall in front of me, is a collection of black couches I suddenly remember something I’d long forgotten… how, in my twenties, I’d moved from Toronto to Edmonton by train with only a suitcase and how my parents arranged for a truck of ‘stuff for me’ to arrive a few days after I did.

I didn’t know what they were sending. 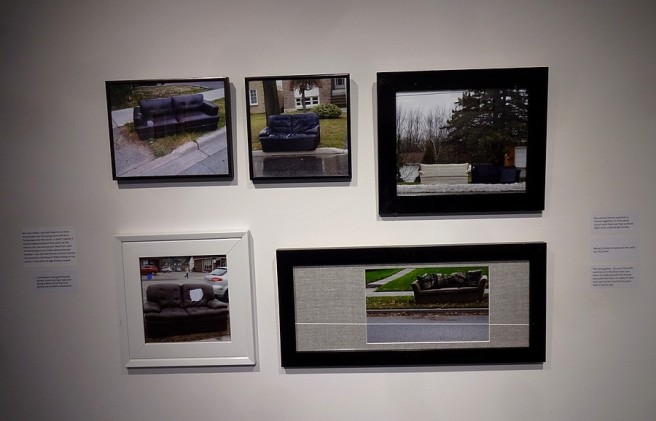 Turned out to be a trunk, some boxes and a few pieces of furniture. One of the pieces being a black couch my father made and on it was a stuffed black poodle named Bandit I’d slept with as a child. It was strange to see it loose, not boxed. It had obviously been tossed in at the last minute, an afterthought.

I’d forgotten about all that.

Forgotten how that totally out of character for my parents  gesture surprised me in a way that made being alone and so far from home feel so much less lonely, an unexpected hug… and the best part was that I never knew which of them decided to send the poodle, which of them yelled Wait a minute!!  to the driver of the truck as they ran back to the house to get it…

I think it’s a thing.