From Welcome to the Hood,  a work in progress.

Glynnis is wearing pink cotton shorts, a striped tee shirt, support hose and brown sandals. Her toenails are painted red. She is only 56 but lives in a nursing home because she is epileptic with brain damage—the kind of brain damage that has rendered her almost childlike. She can’t function on her own. Or even walk. If I don’t visit for a week or two it takes her a minute to remember we’ve ever met. Her parents are close to ninety. Until recently she lived with them. She tells me all this, matter of factly. She thinks the nursing home isn’t a bad place but occasionally has issues with the oatmeal.

She likes colour. So do I. It’s what we talk about. The colour of everything. Look at the bird, I say as I wheel her past a cage in the sunroom, he’s such a beautiful bright blue. She laughs, says that’s not a bird. What is it then, I ask, and she looks at me, back at the cage, then at me again. It’s a bird!  she says, still laughing. I never know what part of her is confusion and what part is just plain smart-ass funny. I think she likes it that way.

I take her out to the courtyard where no one ever goes. Tables and chairs, umbrellas, gardens, a walking path, a bench under an ivy-covered trellis; it all makes for good optics when the inspectors come but in reality it’s too much trouble for the staff to move people outside. Instead they’re crowded around a TV screen near the nurses’ station. No one looks at the set. Most nod off. Some watch the comings and goings in the hall, others beg to be taken back to their rooms.

None of them has the slightest idea there’s a courtyard full of sunshine on the other side of perpetually drawn shades.

There’s a purple hibiscus bush that reminds Glynnis of one her mother has. Her mother’s garden is magnificent, she says, and then we pass a window where we see Marion in her room staring out at something. When she sees us she taps on the glass, points. Marion doesn’t talk much, mostly she sits alone in the dining room and counts her collection of plastic cutlery. But now, this tapping… I’ve never seen her so animated.

At first I can’t tell what she’s pointing at and this frustrates her, she points harder. Maybe she means the hibiscus. I point at the hibiscus. No, no, she shakes her head. I want to tell her to open the window, but it would be too complicated. She may not know how, it may not even open. I don’t want to frustrate her further. She hangs her head as if giving up, then looks at us again, makes a face, annoyed, sad, says something, points. Jab, jab, her finger tapping on the window, intent on getting her message across.

“What’s wrong with her?” Glynnis says.

“She’s trying to show us something.”

Glynnis wants to get going.

Finally, I see what it is. A bird’s nest tucked into a niche in the trellis. I show Glynnis. She laughs, says her mother has a bird’s nest. Marion smiles, her whole face relaxes and as each of us, from three different vantage points, stare at the bits of grass and twigs, it occurs to me that in this split second of discovery we experience the wonder of this tiny thing in exactly the same way, with exactly the same joy. And in that fraction of a moment I see the connections between us and know that the differences are only an illusion. 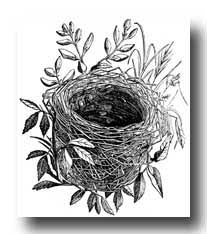 3 thoughts on “it’s the small stuff that connects us”