As with so much of what crosses my reading path, I can’t recall how this book initially came to me. Originally published in 1998 by Polestar, it was reissued by Caitlin Press in 2010.

Inward to the Bones  is an imagining of a relationship between Georgia O’Keefe and Emily Carr. A relationship that never existed. The two women barely met at a 1930 showing of O’Keefe’s work in New York City. In her introduction Braid writes “To me, this passing incident was a spark that struck fire. Here were two of the great abstract painters of the 20th century—among the very few women of the time with a commitment to being artists. What if they had caught each other’s attention?”

And with that Braid begins the imagining. 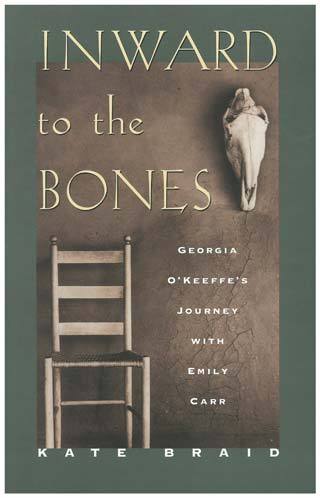 The result is a slim, gorgeous volume of poetic verse written in the voice of Georgia O’Keefe (so true is this voice that the book feels more whispered than written) and based on Braid’s research of both women. Many of the details are founded in actual events (footnotes are included at the back of the book and, in themselves, make good reading).

The story she tells begins with a brief nod to the era in which O’Keefe grew up, the late 19th and early 20th century, a time when women were not taken especially seriously in the art world; O’Keefe tells us about her involvement with the photographer Alfred Stieglitz and, eventually, her thirst for something more, a deeper relationship, a sisterhood of artists.

By the time she meets Emily Carr we’ve pretty much forgotten this telling isn’t entirely real, that the invitation from Carr to join O’Keefe in New Mexico to walk and paint the desert with her, never happened. And yet, there is Emily Carr in the desert with Georgia O’Keefe. There is Carr, feeling out of place and  pining for green in the heat of New Mexico while Georgia O’Keefe looks on and complains about this weird companion.

“She… insists/ on painting my hills/ in shades of British green./ They’re everything but! I snap / Try purple! Try yellow! Try red!”

Then a trip to Bandelier National Park changes everything and suddenly Carr finds connection among the cacti, mesa, bones and bluer than blue sky.

Braid paints a convincing picture of similarities that might have brought these two together, not the least of which their dedication to art in a man’s world. But it’s the case she makes for their differences that moves the book forward, as when O’Keefe wonders at Carr’s ability to function without privilege, wealth, the assistance of a patron such as Stieglitz. Wonder turns to awe and then envy…  “I am brittle and thin, starving/ for what feeds her.”

“I know absence rather than plenty./ Our only difference is rain.”

O’Keefe also visits Carr’s world and tromps about Vancouver Island in her black clothes and fedora, finding nothing among the giant red cedars, dampness, moss, rotting logs and lichen that speaks to her in a language her desert soul understands.

“When we go into her woods together to paint/ I don’t tell her I am terrified.”

She feels constrained by the city of Victoria’s culture, its population of tea sippers “with knees together impossibly tight and polite”. It’s the ‘violence’ of the ocean that finally soothes her, the “waves speak in an accent”  she understands. “It is the silence of the desert, made manifest in motion.”

But the friendship continues to grow and the fascination for each other’s work is also personal. “I want what she has./ I know no other way to get/ than to be here, in her forest, siting under this damned dripping tree for hours,/ trying to see through her eyes/ with her.”

You might say the book is like a painting made by either O’Keefe or Carr, the power of emotions visible through what appears to be the most ordinary of things. In this case: respect for the sisterhood of artists.

What if they’d caught each other’s attention?

Such a good question. Braid makes us feel it’s a loss that they didn’t, while at the same time convinces us that surely they did. 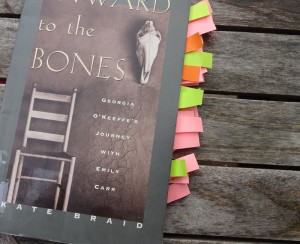 2 thoughts on “this is not a review — ‘inward to the bones’, by kate braid”