Find yourself driving from the Halifax airport to the Annapolis Valley when you see a sign for Coffee. Decide to stop, stretch your legs. It doesn’t matter that you don’t drink coffee, maybe they have something else, which they do… because you are at The Tangled Garden, which has not only beautifully out of season, unruly paths (devoid of other humans) that lead to a labyrinth, but also jams and spicy jellies and chairs made specifically for fairies. 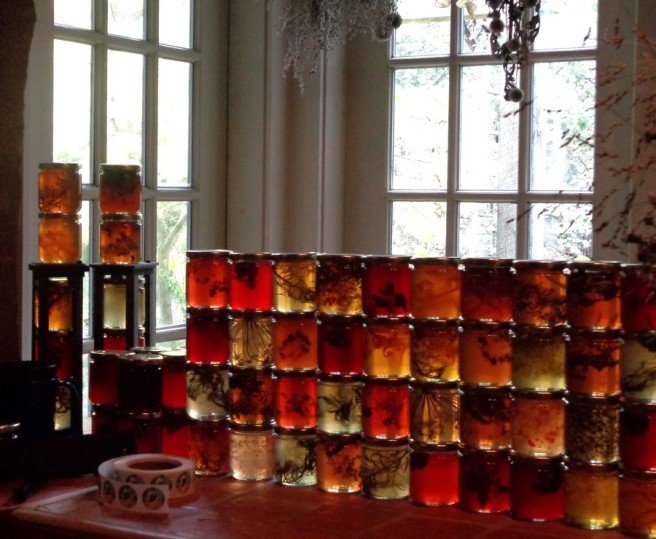 Spend a good half hour walking the labyrinth. 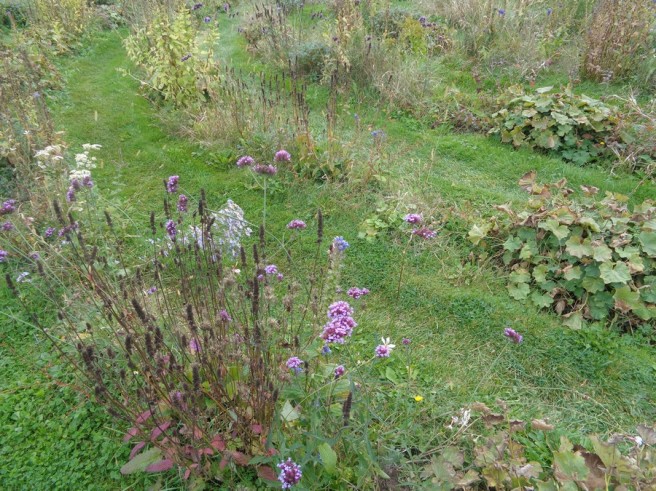 And be so happy it’s October when there’s less to see so you can see it all. 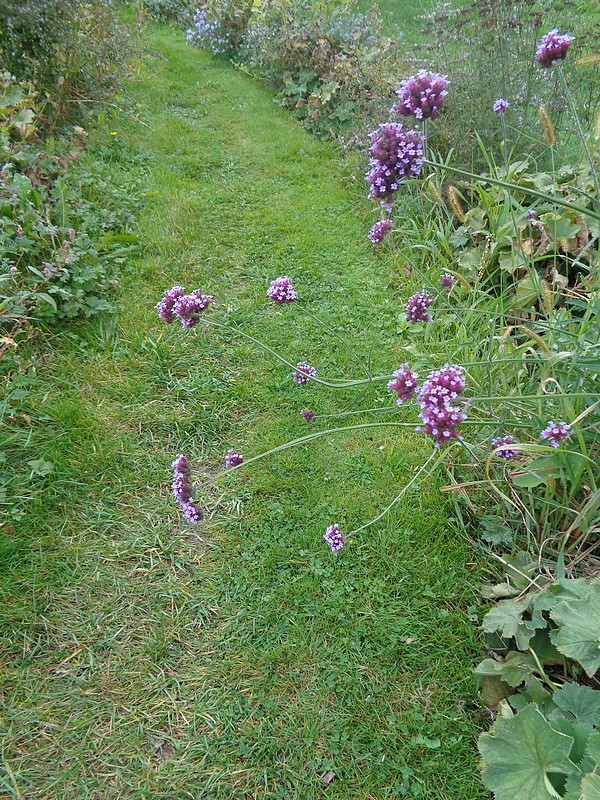 A few days later in Annapolis Royal find yourself at the Historic Gardens where once again you are the only souls wandering this 17 acre space that abuts a wetland complete with dykes. 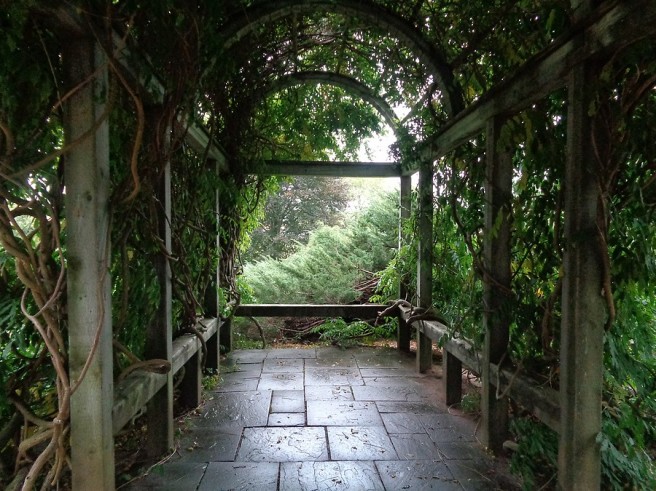 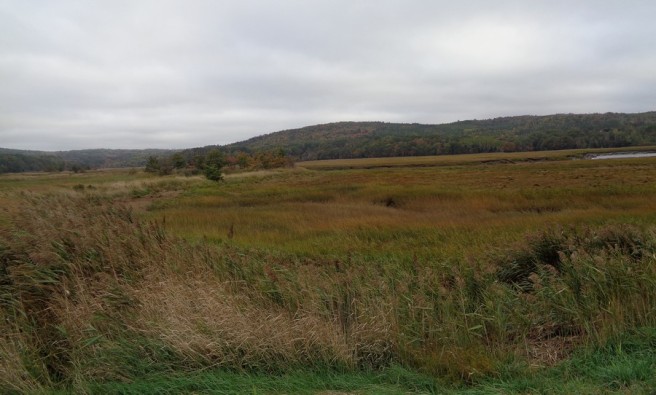 A few days later still, in Halifax, spend the better part of a grey morning at the Public Gardens and marvel at this splendid bit of greenery in the heart of downtown. 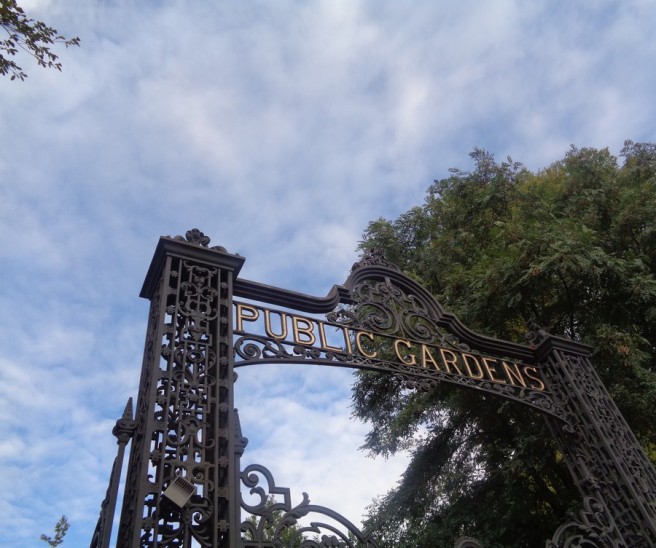 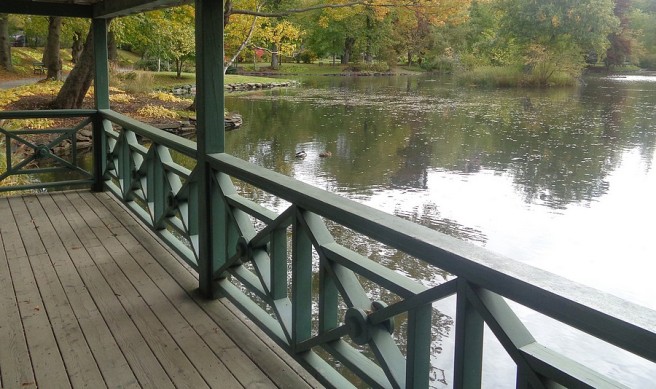 Notice the extraordinary number of garbage cans in almost every conceivable space. (Regret not counting them.) And the corresponding lack of litter. Realize that you have never seen such generosity displayed (of the waste receptacle variety). There is even an off-stage area for garbage-cans-in-waiting, presumably in case any of the regulars get injured in some way. 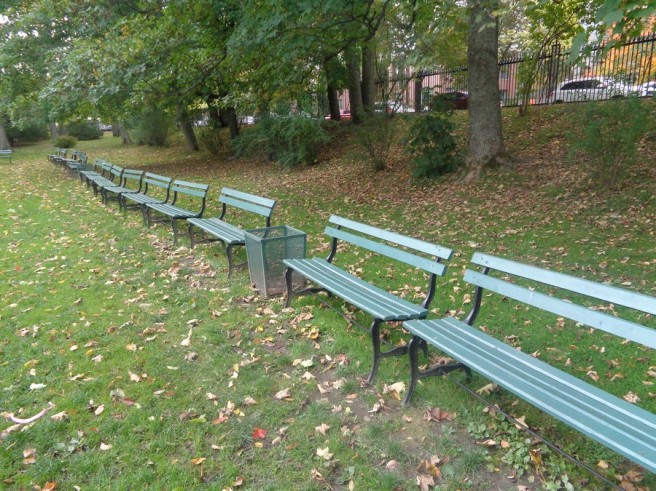 Stop for tea at an oasis staffed by delightful young people. Be reminded of what a joy it is to come across people of any age who enjoy their work.

Take your rooibos chai outside to the deck where no one else dares to venture in October and watch those who wander the garden paths and wonder how it is that so many people are able to drink tea/coffee while walking. You have never mastered this skill nor do you want to as it seems to deny maximum pleasure of both activities.

Notice a man in a trench coat, a fedora and a bow tie.

Notice him stopping and looking at you from the path just beyond the deck.

When he says “Are you with the cruise?”, answer that no you are most definitely not nor would you ever be. Offer that there are a number of people inside the tea house and perhaps they are with the cruise if he’s looking for people from the cruise. He says he is not, he was just curious.

Realize that you are now engaged in conversation and that it’s only a matter of time before he walks up onto the deck and sits down at your little table and proceeds to talk for at least forty minutes, most likely longer, during which time you learn a multitude of things about him, not the least of which is that he is 83 years old and was once Harbour Master at the Port of Halifax and that under his trench coat he is wearing a leather blazer that he bought at a thrift shop for $2.00. He tells you that he often comes to the gardens to dance with his wife on a summer night when a band is playing and that they’re even on YouTube he says. (You will google this later and find that it’s true and then you will never be able to find the video again., which will be annoying as you write this post. Nuts, you will say.)

The best you have to offer is a furtive snap of him walking away after exiting the gardens together and agreeing it was lovely to meet.